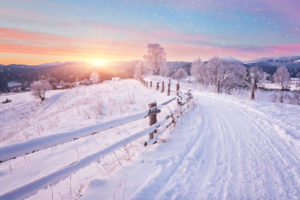 This morning it is greetings from an unusually wintery and festive Bodmin Moor. Even up here looking out at the tors, we had only two frosts in the whole of the previous winter. We have passed that milestone already and the non-recyclable plastic film is barely off the first pack of Tesco mince pies. It is going to be a long, thirsty Christmas this year.

If the anecdotes are to be believed, then Boris is going to win his bet on a shopping frenzy. The shops are open, with some obvious exceptions, as are the cafes and restaurants and nothing is going to get in the way of the great British tradition of having fun by spending money on things that we don’t need. Black Friday may have been a non-event this year, but which sane retailer would bet the farm on cybersales a week before the end of lockdown?

It is party time on the equity markets. The UK starts injecting people today, showing that either we are the best country in the world (source: Gavin Williamson, Secretary of State for Education and a man of commendable patriotism), or else the country with the Healthcare Regulator most open to political pressure (source: unnamed conspiracy theorists). Not only are we starting the vaccinations, but we have so utterly bored investors with Brexit that they no longer care. The markets have long taken the view that Brexit was an ‘interesting’ idea. Whether we Deal or not is going to make precious little difference to the markets, what matters is it is actually going to happen in 24 days’ time. Before I get shot to pieces: Deal or No Deal makes a massive difference to a relatively small number of industries, but in aggregate there is very little difference to the economy. The relevant point is that UK equities have at long last started to show a bit of form.

Readers will know that we consistently argue that markets are most comfortable being myopic. Grey is a nasty, confusing thing, it is the colour of fog. Investors much prefer black and white. And in this most extraordinary of all bull markets, this week is expected to deliver both agreement on the next US stimulus package and more promises of money by the European Central Bank. What is more, rumbling away in the background we have the promise of a new President of the United States, a return to internationalism and transformative investment into life beyond carbon.

Just staying with carbon for the moment, we can all be forgiven for getting mixed messages from the UK government. Hard on the heels of the Chancellor’s avoidance of almost anything ‘green’ in his latest spending plans, his boss has significantly upped the ante. Amongst everything else Vaccine and Brexit-related that was going on last week, Boris slipped out the little gem that he is changing the UK’s target of a 57% reduction in carbon emissions (relative to 1990) by 2030 to 68%. And good for him too. This is a significant acceleration in the shift to net zero; it will need huge public and private investment and will set the UK as a genuine leader in decarbonization (assuming that he means it).

We should also mention last week’s important speech by Antonio Guterres, the secretary general of the United Nations. Senhor Guterres has re-emphasized climate change as the greatest systemic risk, along with this intriguing idea that governments should tax carbon rather than income. It has complications, mostly centred on how carbon is measured and audited, but is a persuasively powerful concept. It links both financial reward and penalty to carbon performance, a move which many – including the erstwhile Governor of the Bank of England – think is necessary to get to net zero. The UK hosts COP 26 in Glasgow in the first two weeks of November next year; it is increasingly apparent that Boris has realized the global opportunity that this gives him and he is not going to miss his chance to be seen as a world pace-setter in the most important issue of our times.

When everything is this cheery, experience says that there is a fly somewhere in the mulled wine. We have a wary eye on the rises in sovereign bond yields, and the rises in many commodity prices, both minerals and foods, suggest that inflation is not to be ignored. The vaccine buzz is also feeling overdone: the process is going to take a year at least in economies that can afford it. Markets appear to be looking to a form of normality in 2022 and maybe overlooking that 2021 may not see the quick snap back that is starting to appear in share prices. But I have a hard-earned reputation for both bah and humbug and it would be wrong to be too grinchy as we head towards the end of a year that could have been so so much worse.

Speaking of next year, a date for your diaries. Our first virtual roadshow of 2021 is on the morning of January 26th. If you have not yet received an invitation, please drop Jill a message on [email protected]. We will use the event to set out our (recyclable) stalls for the year; it will be around an hour long and CPD-able.

Finally, well done to those who spotted last week’s link to Mr and Mrs White-Christmas. Today, of the small band of those who actually make it in The Great Escape, can you remember which was played by a singer with a number one record to their name?

HA804/282
All charts and data sourced from FactSet