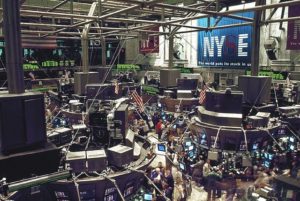 Ah, springtime. It is March, and time to think of bleating lambs, the auroral singing of the robin, hosts of daffodils, the seductive scent of freshly mown grass. Perhaps.

Spring 2020 has started with hailstorms and the fastest 10% drop in the American stock market in history. Last week was weird and painful in equal measure. Those who came to our roadshows in January will hopefully remember that we said then that US equities in particular had risen a little too far too fast in late 2019 and might cause a little shorter-term wobble. Whilst Hawksmoor prides itself in always attempting to be subtly understated, our expectation of said ‘short-term wobble’ probably stretches this beyond credibility.

The point though is that equity markets were ripe and ready for what is euphemistically called a ‘correction’. I suspect that what we saw last week was indicative of what we should now expect to call normal market behaviour. What was achieved in six days in February may take only three or four days next time.

The C-virus is most definitely the excuse. What we, nor anyone else, cannot yet gauge is whether it is also the reason. It is normal and rational market behaviour to react to this uncertainty by selling first and asking questions later. It is also largely the way of the world that this sort of thing happens after a dose of leveraged bullishness, resulting in a scramble for liquidity to meet margin calls. Without doubt, this was a major factor in the severity of the falls at the tail end of the week and explains the otherwise nonsensical fall in the price of gold.

Those who have been following my weekly ramblings for a while will know that I have always taken a passing interest in the dark arts of technical analysis. The power of pictures and numbers defies logic for many. Some of us also wonder why gravity affects the moon, but not a balloon? No matter. One of the technical indicators that I am given to looking at is the ‘14 day relative strength indicator’, or the ‘RSI’ to its friends. Very simply, this is a measure of how much a price has gone up or down in the past 14 trading days.

Just as straight lines tend not to exist in nature, nor do they in the mysterious world of financial markets. It is a tweak on mean reversion and laws of averages, whereby extreme moves have a tendency to fizzle out. So let me get to the point. At the backend of the last week, UK share prices were, on average, as oversold as I can ever remember seeing. The number of RSIs that were at levels I would describe as extreme was, in my experience, unprecedented.

Does that mean that we are going to have a pause? Yes. Does it mean that it will last? We have no way of knowing. What we do know is how the virus will keep spreading and that the media will let us all know about it. The key question is how markets will now react to the ongoing worsening of global news flow. Will they look to the improving trends in infections and deaths in China, or worry instead that the virus will bring recession?

There will probably be a little process of wait and see. Last week will have been a shock and most investors will want to pause, take a deep breath and try to work out what should happen next. It is very unlikely there will be a quick rebound, and we should realistically expect that it will take another quarter until a sustainable degree of confidence returns. Our tactics are that we shall keep our portfolios cautiously positioned (which is in our DNA) and that we will look to pick off selectively those prices that we think have hit irrationally low levels. All of this should hopefully be as dull as you would expect from us.

The virus keeps me from going off on one about the government. All the signals are that we are going to be given what we all previously called ‘No Deal’, but is now disingenuously referred to as an Australia-style deal. Great. I am also completely confused as to whether the government wishes to cut or to raise taxes at either the personal or corporate level. One would also suspect that the ejection of teddy by one of our most senior civil servants is the cause of merriment rather than contrition in Downing Street. Maybe more important than all this, though, is what it will mean now that the Court of Appeal has ruled that all the government does must be cognisant of the commitment to net zero carbon.

Congratulations to the select band of Auf Wiedersehen Pet buffs who knew that Oz was missing. Today: almost, biopsy and chintz – what record do they jointly hold in the English language?

The Renewables Infrastructure Group, past year. Not everything fell last week. 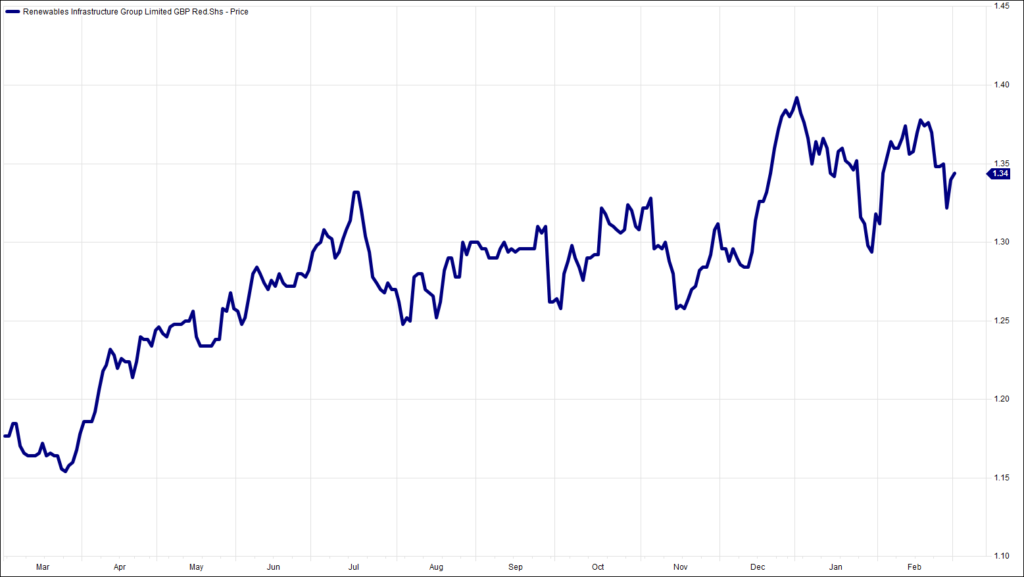 HA804/246
All charts and data sourced from FactSet