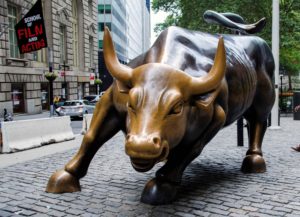 Humans like round numbers and anniversaries. We are two months away from the hundredth anniversary of the end of the First World War. Saturday marks ten years since Lehman Brothers filed for bankruptcy. The numbers should have no significance, there is no logic why the hundredth year should matter more than the ninety-ninth, but there is no denying that it just does.

Leaving aside our genetic attraction to numbers with zeros, let us ponder for a moment on the importance of history. Some would argue that it is only possible to understand the rise of right wing politicians in Germany in the 1930s by putting this into the context of the end of the First War. Without stretching the analogy too far, it is true that it is very hard to make sense of the current state of capitalism without a passable understanding of the Great Financial Crisis.

Capitalism relies on confidence. Whether you rely on a bank to give you your money back when you ask for it, or on the US government to make payments on your treasury stock, you are making an act of faith. The system whereby goods and services are exchanged for ‘money’ needs to have said ‘money’. Without that, or without confidence that money can be found, commerce comes to a quick stop.

The past decade of zero interest rates and of quantitative easing has happened to restore that trust in the global banking system. It will be a long time until we know whether or not that has actually succeeded. It is however undeniable that the evidence at the moment is pretty favourable. Yes, on the one hand, the perils of banks have spawned cryptocurrencies, but the American equity market has risen pretty much unbroken for ten years. As votes of confidence go, that is quite impressive.

There is a line of reasoning here that I have touched on before, but I am going to explore slightly further here. So please bear with me, this decade of rising markets is possibly the most important thing that has happened in any of our working lives.

I have long laboured the evils of passive investment and the damage done to wealth, especially here in the UK. Ten years of rising equity markets has been the lifeblood of passive investment. What, so the argument goes, is the point of paying for active management when the market does it for you?

Let us leave the rights and wrongs of that, they are not relevant here. What matters much, much more is that the incredible rise in passive investment has been instrumental in the dynamic shift in power on Wall Street from the ‘sell side’ to the ‘buy side’. A shift, incidentally, that is very much supported in Europe by the regulation that we know and love as MiFID II.

I will explain. A decade ago, the seat of power in global finance was with the Wall Street banks: Lehmans, Goldman Sachs, Bear Stearns, Merrill Lynch, JP Morgan. That looks like a transient phase: now the force lies with the asset managers. Step forwards Blackrock, Vanguard and State Street. The waters are muddy however, the old banks are no fools. Goldmans, JP Morgan, UBS and Deutsche Bank all manage more than $1tr each (Source: Willis Towers Watson).

You can be forgiven for thinking that this is all jolly interesting, but so what? The point is that there is now a very significant concentration of shareholder power in hands of passive investors. It is these asset managers that have the ability to change corporate behaviour. It is the passive asset managers that have to engage with company management, it is they who have the ability to put corporate behaviour on a sustainable footing, to cut carbon emissions, to try to follow the UN’s Sustainable Development Goals and to be better companies.

It is they who can think and act long-term. It is also quite a contrast with the active managers who are compelled to think no further than their next quarterly performance number. As a quick aside, with the fee race to the bottom having hit zero, policies on engagement with management are becoming a key differentiator amongst passive managers – the race to be greenest. Regular readers may think they would never see me argue this, but the unintended consequence of post GFC economic policy – the rise of the passive manager – may just be a massive force for good.

It is a while ago, but Missy sipped a Minnesota, or a mini soda depending on how you hear it. Today, to get us back in the trivial swing, whose fictional wedding happened to the strains of the wonderfully named Angry Anderson?