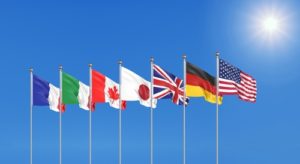 There are probably few who remember Spike Milligan’s Q8. It was an acquired taste. Amongst Spike’s weekly surreal outpourings was his habit of not bringing sketches to a conclusion or punchline, but instead having his cast move closer to the camera, step by step, chanting the inquisitive mantra “what are we going to do now?”

This is a self-indulgent and roundabout way of getting to say that markets feel as if they are running out of ideas. What are they going to do now? And frankly, everyone is pretty much clueless. Last year’s lockdowns distorted economic life to such an extent that no one is genuinely able to make head or tail of current data. Plenty pretend that they can, and may even fool themselves into believing so. But how fast are economies growing at the moment? Should we be comparing the best guesses of output for the past month, or quarter, against last year? Or against 2019? Or how about an average of the two? Or maybe a five year average?

We should apply the same logic to inflation. Yes, inflation rates have risen. But should we compare the current rate of change to last year – when most things were mid-plummet – or should we be looking at 2019 again? Or, again, maybe a five year average? The United States publishes its monthly inflation update on Thursday this week, and the numbers will be high. Consensus is that the headline rate could be as high as 4.6%, and the core rate 3.3%. But what does this actually mean? It tells us no more than over the past month prices in the US have gone up a bit, while this time last year they were falling a bit, and that makes the difference in the rate of change (for that is what ‘inflation’ is) between 4% and 5%. If one leaves out oil and food (who needs these, after all), then the difference is closer to 3%.

Does that add up to an inflation problem? Or even inflation that is not a problem? It is nigh on impossible to tell. The key, as Central Banks are prone to remind us, is not the number on the page, but people’s expectations. If businesses and consumers expect inflation to be 5%, for example, they will act accordingly.

I started this week’s column with the assertion that few of us remember watching Spike Milligan. Even fewer, possibly, have worked with an expectation of rising inflation and interest rates. I admit to starting out in financial services in 1986. I am greying, most of my joints creak, I am a member of the National Trust and I habitually wear a cardigan. The summary of the financial history of my 35 working years is that the expectation of inflation, and the cost of borrowing, has gone from 15% (or actually slightly higher), to 10%, then to 5% and ultimately to zero. Even someone as wrinkly as me has only ever worked in an environment in which long-term expectations of inflation and debt costs have been falling.

Yes, I readily admit that it has not been a smooth line downwards and there have been big wobbles, especially around the UK’s first Brexit in 1992. Nonetheless, over the past 35 years inflation has gone from 15% to nil. What happens next?

There should be a dramatic pause here. Because no one knows. And it feels as if markets are waiting for someone or something to show them the way (to borrow the phrasing from Pink Floyd’s ‘Time’).  The chances are that Thursday’s US inflation update will cause a sizeable knee-jerk. We will have more of these over the summer as investors weigh up whether the world is on the cusp of another phase of low inflation and steady growth, or whether the future is a less benign mix of higher inflation and higher interest rates.

I am sure I am running the risk of waffling my way to saying nothing this week. If it feels that way, it is probably to this column’s benefit. Markets are on temporary pause. The proposed global minimum tax rate is mostly a non-event, and could have been very considerably more damaging to the ‘big tech’ companies. The G7 meeting will hopefully lay out the groundwork for the altogether more important COP 26 in November. Foreign holidays? Indeed.

In fact, the most important event of the past fortnight since the last Innovation has been almost completely overlooked by the markets, and I am at a loss to understand quite why. The decision by the Dutch courts that Royal Dutch Shell (and, by default, every business) must act in compliance with COP 21 is of massive significance. At face value, this is essentially saying that RDS must halve its oil business over the next eight years. Of course it is never that simple. But if governments really do intend to honour what they all signed up to in 2015, which is what November’s COP 26 will tell us, the ramifications will be stunning. And if the Cornish sea air in Carbis Bay emboldens everyone at the G7 this week, we may be just about to get the first pointer that this really is going to happen. That would be (and I apologise for the cliché) a genuine game changer.

Finally, well done to all those who knew our last reference to an English country garden. Today: “Where, oh where, were the Germans? And frankly, who cares?” Who was describing what event in 1988?

HA804/302
All charts and data sourced from FactSet