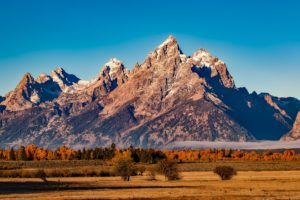 It is already feeling terribly autumnal. A splendid selection of fungi has sprouted in my meadow. I dare commit none to the frying pan, for fear of the eternal ridicule of having been another ignorant scoffer of a death cap. The swarms of wasps are intoxicated on the carpet of windfalls, the horse chestnuts are a deep brown. Most of all, not only is it dark when the morning alarm goes off, but we are a week into Great British Menu.

It is the time when the great and not-so-great of the world’s bankers (are there bankers not of this world?) gather for a hoedown at Jackson Hole in Wyoming. It is a wonderful looking spot, the sort of place that is quite definitely out of bounds to all of us under the UK’s constantly perplexing rules about (dis)incentives.

The shebang is hosted by the Kansas City Fed. Kansas City is a mere thousand miles east-southeast, but Wyoming falls under its regional remit. As an American crow flies, San Francisco is actually slightly closer. The key speech this year is on Friday, when Fed Chair Jay Powell’s every syllable will be analysed for its impact on the dollar.

Most of the time, none of this matters terribly much. But now the dollar has become very important indeed. Should Mr Powell play the Rooster Cogburn role and spin his ’73 Winchester in the direction of American inflation, as well he might, the dollar is going to go up. And that matters if you are Turkish. Or Argentinian, or Venezuelan.

I should add a quick tangent that I am much taken with Venezuela’s wheeze to tippex out the last five zeros on its bank notes. We may automatically like to take the high ground here and think ‘banana republic’ or something similar. It is though pretty much the same thinking that lay behind RBS’s 1 for 10 share consolidation in 2012 and then pretending that the price hadn’t fallen nearly so far.

But back to Mr Powell, the dollar and inflation. Should JP not play the hard man, his risk is that markets sell US treasuries rather than Turkish lira. That would also not be a great outcome from a nice trip to Yellowstone.

He thus has a fine line to walk. The ability to tiptoe through a minefield however is a prerequisite on the CV of a good central banker. Markets will be best served, in the short-term, should JP take the diplomatic path and avoid saying anything at all.

The fleeting reference to short-termism takes us to Mr Trump. Donald has asked the SEC to have a look at whether markets would be better off should companies be required to report half-yearly, rather than quarterly. Gosh.

We might disagree. Would it not be better if companies reported monthly? How do we all manage to get by knowing that something untoward may have happened during an entire quarter? Indeed, monthly would be better, ideally with a ‘flash’ trading update, together with balance sheet and cash flow every fortnight.

It is of course utter nonsense. No matter that this is how economic data is increasingly reported (UK GDP, for instance, is now subject to monthly estimates/guesses and European inflation is reported twice a month). We (that is a collective ‘we’) berate the short-termism that results in the average tenure of an American chief executive being a mere five years, yet share prices are subject to horrendous falls should a single quarter’s trade fail to match expectations.

Why is business investment so low? Markets are short-term: the chief executive who says that profits will be lower for a couple of years because the company needs to invest to fund growth will be rewarded by a hammered share price and the opportunity to pursue other career opportunities/spend time with the family. Why not just simply use the cash to buy back shares and walk away with the LTIP? It is, as some say, a no-brainer.

Why do the markets care so much? Probably because fund managers are judged equally on their quarterly performances. When you, the reader, look at a fund and see a lack of quarterly, or even monthly, drawdown, do you think what a great job the equity manager is doing? Or do you think he or she has backed a lot of businesses managed for the short-term and to the detriment of the future?

So well done Mr Trump, let us hope that fund managers, investors and regulators all take the hint. That will take true grit.
A very well done to the select band that knew ‘m’ for sis. Today, if Della wore a new jersey, what did Missy sip?