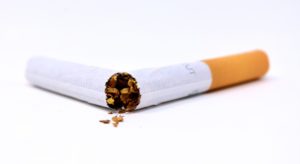 “Turn and face the strange.”

It is a near trillion-dollar industry that counts 20% of adults globally as its customers. It also currently pays £6 billion of the UK market’s dividends (FactSet). Yet investing in tobacco is clearly divisive: funding the leading cause of preventable disease and “the only legal consumer product that, when used as intended, will kill half of all long-term users” (Food and Drug Administration (FDA) Commissioner, Scott Gottlieb) is, for some, to do Beelzebub’s work. For those of a more libertarian persuasion, such protests unduly trample over personal choice, are inconsistent and preclude otherwise attractive opportunities. Herein we attempt at a balanced view of the state of the industry and its trajectory.

The economics of the major tobacco manufacturers are – or at least have been – unquestionably enticing. More than one billion consumers regularly buy their product regardless of the economic climate or price. Cigarettes are cheap to produce and transport, growers have little bargaining power, and bans on advertising inhibit new competitors from entering the market, so saving a packet on marketing. Brand loyalty is strong and market positions are well entrenched amongst a handful of players (Chart 1). These factors foster very profitable businesses: British American Tobacco, for instance, earns net margins of around 30%. 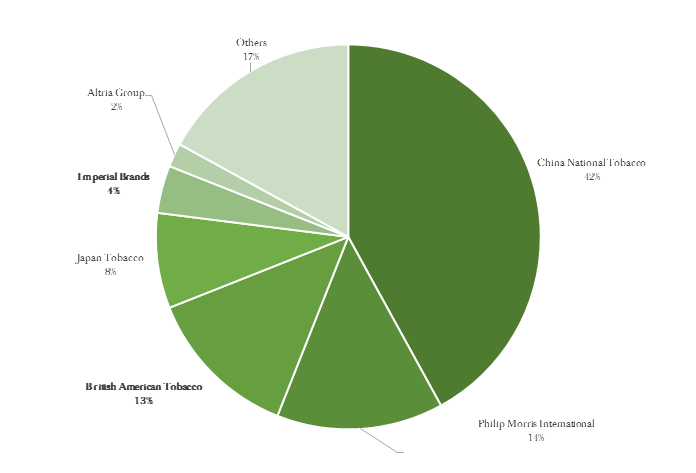 Smoking prevalence in the US, Western Europe and Japan has declined rapidly since the 1980s (Chart 2) due to greater awareness of health hazards and effective tobacco control policies, such as advertising bans, taxation and smoke-free workplaces. Success rates for quitters are at an all-time high because of changes in culture and better access to support.

Despite these developed market trends, at the global level the tobacco market is still growing. Falling volumes here are more than offset by emerging markets and their population growth, rising disposable incomes and a less stringent regulatory environment.

Chart 2: Sales of cigarettes per adult per day since 1900
Source: International Smoking Statistics (2017) 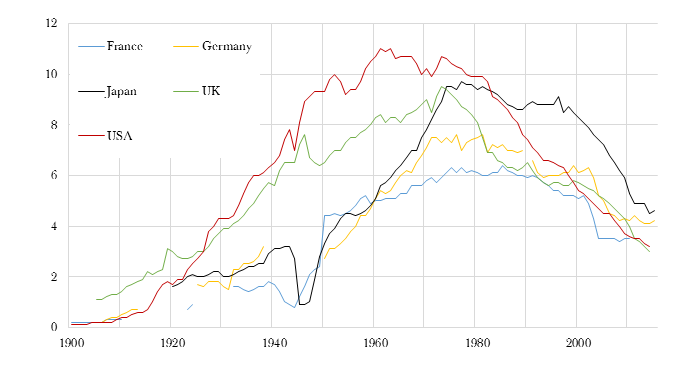 Tobacco and the public purse

The UK Government collects c. £12 billion in tobacco duties and VAT each year (Source: TMA), which is about 2% of total revenue (plus indirect sources, such as income tax from industry employees). Estimates for NHS spending on tobacco-linked treatments range from £3 billion to £6 billion annually, though there are other costs, such as cleaning butts off streets or tax lost from illness-related falls in productivity. The full calculation is even more difficult: we need to guestimate a patient’s cost to the NHS had they not smoked. Non-smokers tend to live longer and so, arguably, end up with greater healthcare costs over their lives.

Economic considerations are certainly not the sole factor (though in certain emerging markets where tobacco duties contribute up to 10% of government income, the economic arguments are rather more forceful). In the US, which accounts for 14% of retail tobacco sales (Euromonitor), authorities are stepping up the battle against smoking by proposing to limit the nicotine permitted in a cigarette. Their aim is to reduce addictiveness to assist even more consumers to quit. Were such a policy to be introduced, we would expect a sharp reduction in both the number of smokers and the daily volume of cigarettes consumed. In other words, this would super-charge the decades-long decline in the US tobacco industry.

The major caveat is that by law in the US tobacco policies must be science-based (most other countries can rely on mere whim and prejudice). Therein lies the challenge: authorities must prove that a nicotine standard will not encourage users to migrate to more harmful products (such as cigars or roll your own), nor that consumers will compensate with bigger drags or smoking more, nor that it will encourage an illicit trade in full-strength product. Expect legal challenges, an economic assessment from the Treasury, and a statutory mandated delay of up to two years so the industry can adapt. At the earliest, then, a nicotine standard could be five years away.

NGPs are heralded as the industry’s potential saviour against low or declining cigarette growth. Today NGPs account for around 2% of the tobacco market (over 90% is cigarettes), though that is forecast to double by 2021 (Euromonitor). British American Tobacco has spent $2.5 billion on its own suite of NGPs and has a 30% revenue target by 2030.

NGPs split into two main sub-categories: vapour and heated tobacco products. The former, which creates a vapour by heating liquid nicotine and flavouring, is by far the larger. The latter is most relevant in Japan where it is illegal to buy or sell liquid nicotine. Little research is available, though it is generally accepted both are less harmful than cigarettes and are an effective means of quitting altogether. Heated tobacco is the more controversial since, unlike vapour, it still contains tobacco. It is heated at a much lower temperature than cigarettes, which is believed to reduce the number of toxins inhaled while still delivering on the taste.

Nascent NGP markets may offer an avenue for growth for tobacco manufacturers, but note that the competitive nature of these markets is starkly different to that of cigarettes.

First, barriers to entry. Since NGPs do not have the same restrictions on their marketing and brand loyalties are yet to be entrenched, the door is wide open for new market entrants. In the US, for example, the leading vapour brand is JUUL with a 60% market share (Nielsen). JUUL was spun out of PAX Labs, which was only founded in 2007.

The second issue is that Big Tobacco has an image problem. It is not ‘cool’, it is commercial and perhaps even a bit evil. New entrants, like JUUL, have a clean legacy-free image. Buying up trendy young companies doesn’t work either: as with craft beer, to the consumer’s eye the acquired inherit the corporate stain. Firms must tread a fine line: marketing an appealing product without the regulator feeling that they are targeting the youth (the FDA for example has spoken out against youth-led flavours like “gummy bears”).

Third, the favourable cigarette economics discussed above don’t all hold for NGPs. Even if successful, the additional marketing and development costs required dampen the margins and expected returns (although there is at present generally a price, and hence margin, advantage to NGPs due to the absence of excise duties). And remember that these products help users quit: the flip side of their growth is that they likely hasten declines in overall consumers.

On the other hand, Big Tobacco is well placed to compete in NGP markets since it has the capital, manufacturing capacity and importantly the supply chain networks. It may be simple to commercialize an e-liquid blend, but launching a new device requires substantial capital investment. The incumbent tobacco giants have shown they can adapt. Philip Morris’ IQOS, for example, commands an 80% share of Japan’s heated tobacco market. Imperial Brands’ innovative nicotine salt product myblu, combined with its e-liquid collaboration with Cosmic Fog, is recognised as one of the strongest new propositions in the e-cigarette market.

A number of readers will have an ethical aversion to ever investing in tobacco stocks, irrespective of price (and by using our bespoke portfolio services, you can steer your Investment Manager accordingly). From the stone-cold perspective of financial analysis, however, there is definable value in the future cash flows of these businesses.

Concerns over falling cigarette volumes, the implementation of a nicotine standard in the US, and the economics of next generation products have recently led to sharp falls in tobacco share prices: their previous premium ratings relative to the wider market are now substantial discounts (Chart 3).

While these are valid concerns, current share prices now discount very severe outcomes. Change is coming, though from growth in emerging markets to the potential of NGPs, an investment case cannot be stubbed out just yet.

Health Warning/ Disclaimer
This document should not be interpreted as investment advice for which you should consult your independent financial adviser. The information and opinions it contains have been compiled or arrived at from sources believed to be reliable at the time and are given in good faith, but no representation is made as to their accuracy, completeness or correctness. Any opinion expressed, whether in general or both on the performance of individual securities and in a wider economic context, represents the views of Hawksmoor at the time of preparation. They are subject to change. Past performance is not a guide to future performance. Hawksmoor Investment Management Limited (“Hawksmoor”) is authorised and regulated by the Financial Conduct Authority. Hawksmoor Investment Management Limited is registered in England No. 6307442 and its registered office is at 2nd Floor, Stratus House, Emperors Way, Exeter Business Park, Exeter EX1 3QS. HA2481