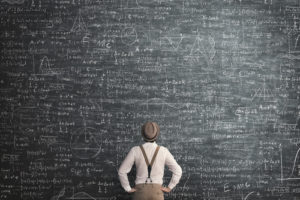 You may be forgiven for thinking that mathematics was supposed to make the understanding of the universe easier. Regrettably the whole numbers thing was designed by somebody with a most peculiar sense of humour. Today’s first little quirk is centred on the peculiar game that is percentages.

The foibles of the percentage are arguably more valid in the world of investment than anywhere else. We are obsessed with percentages. I am sure that none of us does this to deliberately obfuscate, but it certainly helps if you know what you are doing.

How should you respond to this? Well, of course, it all depends. Were you to have been astute enough to have bought the shares before the announcement, you would be 100% up. Fantastic. The problem is that you may very well have bought the shares in MadeUp Biotec five years ago at 100p just after they said they had cured the common cold. In which case, you are still 98% down.

Where percentages are concerned, one’s starting point is everything. One investor’s 100% gain is another’s 98% loss. Without a reference point, the change is meaningless.

Precisely the same logic applies to the issue of whether or not we are in a ‘recession’. Here we are helped by there being a widely accepted definition of a recession. It is two consecutive quarters of a shrinking (apologies, I cannot bring myself to use ‘negative growth’) of gross domestic product (GDP).

The definition of recession, though, is utterly useless. It entails a timeframe – two quarters – and a downwards direction. Brilliant. So the UK economy could, again theoretically, shrink by 0.1% in each of two quarters and we would be lambasted, even lampooned, for being in a recession. On the other hand, we could collapse by 50% in one quarter, only to grow by 0.1% in the next, and we would have successfully avoided a recession. In the first case GDP is down by 0.2%, in the second it is down by 50%. Yet only the first qualifies as a recession.

The UK will almost certainly cease to be in recession in the quarter that starts on Wednesday. Our economy shrank a little bit in total over January, February and March, before activity collapsed during April. May is anyone’s guess and there has been a bit of improvement during June. So we shall have two quarters of falls in GDP. Unless the second wave takes a grip over the remainder of the summer, the economy will have fared better than in the second quarter and, hey presto, no more recession.

The government will be able to point to the success of what it has done. Reopening the economy will mean that we have successfully come out of recession, that we are back on the right tracks. That the economy may still be a fifth smaller than at the turn of the year will be forgotten, confined to the smallest of the small print. Here again we come back to the quirks of the percentage. A 25% fall in GDP, followed by a 5% rise works out at a 21.25% drop. In percentage terms, going uphill takes an awful lot more work than the previous descent.

The second wave of the pandemic has become more of an issue over the past week. Strictly speaking, much of the United States is still seeing a worsening of the first wave and has yet to get as far as number two. What matters to markets is whether, and to what extent, lockdowns will be reimposed in response to rises in infections. From what we can see, these rises are inevitable. But it is quite hard to see how Westminster could tell a million or so people holidaying in the South West that they have to go home again and lock the doors.

The government helpfully publishes both the R number and the percentage change in infections (credit where it is due). As at last Thursday, the national R was 0.7 to 0.9, with a shrinkage of 0.2% to 0.4%. That would suggest that Covid-19 is currently under control. It needs to stay that way (data source: https://www.gov.uk/guidance/the-r-number-in-the-uk).

I had a sneaking suspicion that the 1990s would prove less popular, so a very well done to the select few who spotted the line from M People. If we keep the sequence going, we come to the musical desert that was 2003, from which I offer the almost Shakespearean “uh oh, uh oh, uh oh, oh no no” Does anyone wish to admit knowing this one?

National Express, past 3 years. The CEO is on the move. 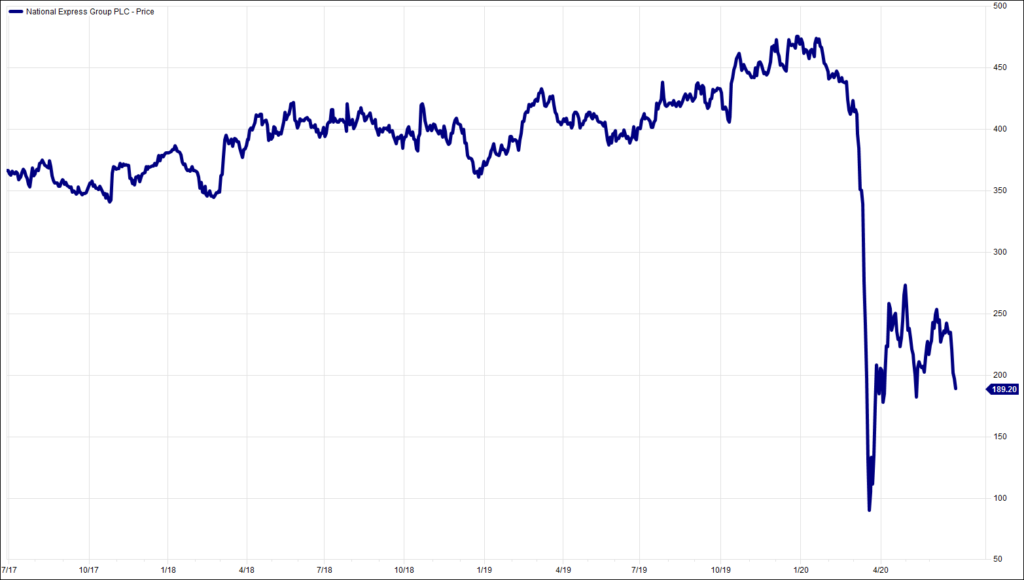 HA804/261
All charts and data sourced from FactSet