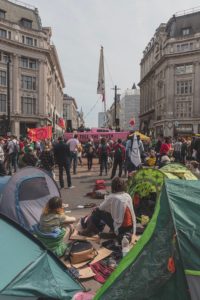 My apologies for the inordinate length of time since our last edition. I spent most of the pre-Easter fortnight learning about the intricacies of the discoordination of the NHS in greater detail than I would wish on anyone. Today we are back to the rat race.

The truth is that we have missed very little in April. So much has happened, so little has changed. Markets are robustly hanging on to their dizzy first quarter. That is actually understating things: equities are trying to push on even higher.

Next Wednesday, though, is the start of May. It is in the rules of rubbish investment writing to argue earnestly about whether any year will be one in which to sell in May. Doubtless, much garbage will be typed about this over the coming fortnight. Please remember that the definitive answer is ‘probably, but it all depends’.

This begs a more existential investment question. If you or I knew (actually knew) that average equity prices would be 10% lower in three months’ time, what would we do? Our tea leaves and crystal balls will not say what will happen beyond three months, only that equity prices will be down 10% at the end of July.

So what is the right thing to do? If you sell, how much? Let us assume a typical portfolio with a 50% equity weighting within a tolerance band of 40-60%. Were you to move to the lowest possible weight (40%), your saving (assuming you switch to cash), is 10% of 10%. Which is 1% of performance, assuming zero transaction costs.

Is that something worth doing? For all the paperwork, for all the rebalancing, is a 1% improvement sufficient? As is usual for me, the questions are deliberately rhetorical. There are no rights and wrongs here.

It is also, I think, worth repeating why Hawksmoor (and others) espouse the virtues of maximum and minimum allocations to assets. They are there to protect us all from ourselves. They are the portfolio equivalent of banks’ counter-cyclical capital buffers. They curb the prehistoric instincts of greed and fear, they stifle the lust to buy high and sell low. They are there to ensure that the long-term performance of the portfolio is as described to the client. They matter

Let’s stick with what matters, but also change tack. Of the things that have happened in April that really matter, the joint top (with my mother’s osteoporosized spine) is learning of Greta Thunberg. You are forgiven for now looking non-plussed. In fact, if you are still with me, I doff my cap and will happily buy you a snifter. But if Greta is new to you, I would urge you please to spend eleven minutes and twelve seconds of your time to watch this:  Greta Thunberg TEDx Stockholm. Miss Thunberg is reported to be talking to British politicians today.

Whilst enjoying some of the climate change at the weekend, and having finished the crossword, I rashly decided to read some of the Telegraph. This is normally an exercise that serves to raise my blood pressure even further, but I was genuinely interested in its coverage of Extinction Rebellion.

The letters page had a smattering of the usual demands of the right to drive one’s motor over Waterloo Bridge as one is a tax payer. The journalistic coverage, however, caught me off guard. It was very surprisingly sympathetic to the idea of Middle England protesting about the lack of governmental action to counter climate change. And that, I think, is important. Extinction Rebellion is at least partly made up of Telegraph readers. And they vote. David Attenborough inspires XR, and he is friends with the Queen.

Whether or not one believes in climate change, the reaction to it is going to play a greater and greater role in our daily lives, personally and corporatively. And it must therefore also permeate everyone’s investment thinking. This is way beyond merely thinking about renewable energy; it is instead thinking what happens when every business is made to spend a minimum percentage of turnover on countering climate change. Or when corporation taxes are raised to fund national projects. Or when executive performance is measured not by earnings per share, but by carbon reduction.

Our last question was rubbish, hence the lack of response. But if you were interested, Frasier’s dad was six foot under in Cheers and needed to be resurrected for the spin off. Today: hey, where did we go, days when the rain came?

Pendragon, past year. Tough times in the auto business 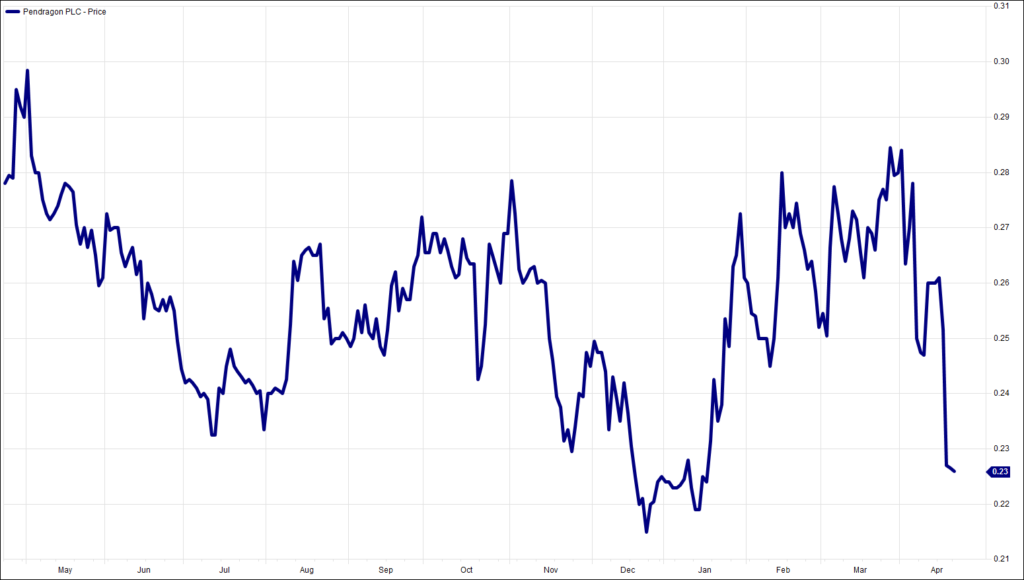 HA804/209
All charts and data sourced from FactSet

Hawksmoor Investment Management Limited is authorised & regulated by the Financial Conduct Authority (www.fca.org.uk). This document is issued by Hawksmoor Investm.ent Management Limited (“Hawksmoor”) whose registered office is at 2nd Floor Stratus House, Emperor Way, Exeter Business Park, Exeter, Devon EX1 3QS. This document does not constitute an offer or invitation to any person in respect of any investments described, nor should its content be interpreted as investment or tax advice for which, if you are an individual, you should consult your independent financial adviser and or accountant. The information and opinions it contains have been compiled or arrived at from sources believed to be reliable at the time and are given in good faith, but no representation is made as to their accuracy, completeness or correctness. Hawksmoor, its directors, officers, employees and their associates may have a holding in any investments described. The editorial content is the personal opinion of Jim Wood-Smith, Head of Research. Other opinions expressed in this document, whether in general or both on the performance of individual securities and in a wider economic context, represent the views of Hawksmoor at the time of preparation and may be subject to change. The value of an investment and any income from it can fall as well as rise as a result of market and currency fluctuations. You may not get back the amount you originally invested. With regard to any of the Hawksmoor’s managed Funds, please read the prospectus and Key Investor Information Document (“KIID”) before making an investment.