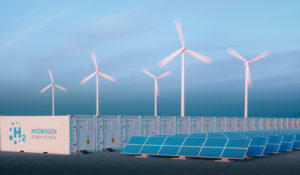 There is precious little in the financial commentary about climate change. It feels almost as if this has had its fifteen minutes of fame and that the markets have moved on. Why should we all worry about a hot spell, or a storm, when there is a cost of living crisis to write about? The war in the Ukraine has similarly faded away from the headlines. But just as Russia and Ukraine are still slugging it out, so business is still getting on with the very real need to wean itself off fossil fuels. And last week BP, almost under the radar, slipped out some details that starkly illustrate the scale of what is, and needs to happen.

You are forgiven for not having heard of the Asian Renewable Energy Hub, or AREH. So please indulge me the chance to explain. The AREH is a project of jaw-gaping ambition, in which BP is acquiring a 40.5% stake. The plan is to produce hydrogen. Lots and lots of hydrogen. AREH is based in Australia, a country famed for many things, notably including vast areas of land, and equally vast amounts of sunshine. Plus a little bit of wind every now and again. The intention with AREH is to cover an area of around 2,500 square miles of Western Australia with solar panels and wind turbines. This will, according to projections, generate electricity equivalent to 30% of Australia’s total current usage. And this will be used to turn water into ‘green’ hydrogen and ‘green ammonia’. The former will power planes, trains, automobiles and factories, the latter will be turned into fertilizer.

The cost of the project is widely reported as being US$36bn, which would make BP’s prospective investment cost slightly over £12bn. That matches BP’s current total annual capital expenditure. We should be in no doubt that BP, staying with this one example, is 100% committed to net zero. Its aim is to have a 10% of the global hydrogen market; there is every sign that it means what it says.

Inflation will come, and it will go. Interest rates will rise, and they will fall again. Prime ministers and presidents will be here today and, if I may say so, gone tomorrow (to borrow Robin Day’s wonderful expression). All the time, though, the world will keep warming. With the pressure on national budgets that is going to come from higher bond yields, spending on climate is an easy and obvious target. Elections will be won and lost on inflation rates, or the cost of living, not on the number of electric charging points along the M5. Governments have always bottled it when genuinely tough calls have to be made about decarbonization, which is perhaps why it is so heartening to see that business (or at least bits of business) realize that the long-term winners are still going to be those that most successfully manage the transition.

I should stress that this is nothing whatsoever to do with ‘ESG’, which is currently getting far too many headlines for all the wrong reasons. It is worth a quick reminder that in Paris in 2015 the world agreed to take measures to limit rises in global temperatures. And agreed to take measures for very good reasons. According to science, the rise in global temperature creates extreme weather events: droughts and floods to you and me. The ice at the Poles is also melting, which in turn raises sea levels. Which means that it is only a matter of time until Fiji, for example, disappears. That matters. You may also have missed that the government of Indonesia, the fourth most populous nation, has decided that it cannot defend its capital city, Jakarta (a city of over 10 million people), from the sea and will need to build a whole new city, on the island of Borneo. It is a fair guess that, amongst other things, this will create the world’s largest construction project. The tides are not going to stop rising just because inflation is 10%.

We need, though, just to dart back to inflation and interest rates. Last week the Federal Reserve raised US rates by 0.75% and the Bank of England raised UK rates by 0.25%. Neither Bank is currently giving the impression that it is doing anything other than stumbling in the dark. There is a strong chance that at some stage the data, over which they have lost control, will show a coincidence of falling inflation and economic growth that looks decent enough. At that stage, they will proclaim their brilliance and markets will mount the most stupendous rally. At the moment, though, the rallies are as trustworthy as a politician’s promise.

This week’s nerve-jangler comes on Wednesday, with the monthly update to the UK’s inflation rate. April’s reading was 9.0%. The Bank now tells us to expect a peak of over 11% in the autumn when the next rises in the cost of gas and electricity kick in. That is one forecast that we would take at face value. As we say every Monday, it is going to be another bumpy week.

Finally, well done to everyone who knew last week’s snippet from Total Eclipse of the Heart. Today, from a year earlier: where did ‘a hundred lonely housewives clutch empty milk bottles to their heart’?

FPC358
All charts and data sourced from FactSet