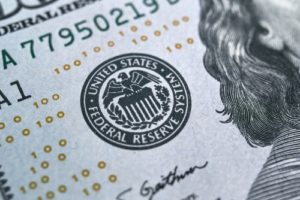 I am not sure if one is currently able to refer to men being marched up a hill and then down again. It is probably more tactful to liken the markets to magnificent men in flying machines, but even this does not quite convey the right degree of dizziness. Markets are more akin to the stage of Total Wipeout (a great moment in televisual history), where competitors were spun around on a large roundabout and then tasked with running barefoot through an alligator swamp whilst juggling snapping turtles and singing the Marseillaise.

Last week’s meeting of the Federal Open Markets Committee was bewildering. Jay Powell, the Chair of the esteemed body, has metamorphosed from a skilfully calm conductor of the markets to a financial Corporal Jones. If one was being harsh, which is sometimes the right thing to be doing, one might argue that the Federal Reserve failed to see inflation coming, fails to understand the causes of inflation and now does not know how to extricate its canoe from this particular creek.

The markets, for a long time, have rightfully trusted the Federal Reserve to steer them through the ups and downs of economic and business cycles. The trouble is that it is a very long time since we last had a proper cycle. The Great Financial Crisis of 2007-09 was arguably the last occasion, and even this one might attribute to a failure of regulation, rather than a genuine cycle. 2020 was a unique imposition of political policy to counter the pandemic. Central Banks, especially the Fed, have not had to worry about an inflation or economic cycle throughout most people’s working lifetimes.

That has changed. There are precious few individuals in the markets who have experienced inflation, or even an old-fashioned cycle. 2022 is a new challenge for them. They are, though, receiving no discernible guidance from the world’s premier Central Bank, which is, to be harsh again, giving a highly credible impression of a fish out of water. The markets, which thrive on certainty, suddenly have no guide to either how high US interest rates may go, nor how fast.

We should not be surprised that markets currently appear volatile, illogical and inconsistent. They have been cut adrift from their comfort blanket of knowing that the Fed will always put things right. The start of the year has seen selling of almost everything that might be deemed ‘expensive’, plus some buying of stocks that might be deemed ‘cheap’. As we were arguing last week, some of this may be seen as the healthy blowing away of some speculative froth; there are though, in our view, a number of babies being jettisoned with the bubble bath. This is something that we should welcome: it is when markets have lost their combobulation that quality assets are most likely to become cheaply priced.

It is also likely that markets are already becoming overly pessimistic about the outlook for this year. We have previously argued that the levels of debt built up over the Great Financial Crisis and during the pandemic mean that the sensitivity to interest rates has increased very significantly. Which means that the Central Banks should be able to engineer an economic slowdown with only minor increases in base rates. The sooner that rates rise, the sooner it is that the markets will start to look for the end of the cycle. The danger is that the floundering Fed prevaricates.

The Bank of England’s Monetary Policy Committee meets this week to decide on the UK’s interest rates. It is a very difficult decision, made only harder by the government’s clear internal wrangling over the upcoming rise in National Insurance contributions, and the apparently inescapable jump in energy costs. A very busy week for economic data releases crescendos on Friday with the monthly US jobless data. These monthly updates have, like the markets, become increasingly unpredictable. That will be the way of things until the Central Banks can demonstrate, and articulate, that they know which track they are on. Until then, the ride is going to stay bumpy.

Finally, very well done to those old enough to know last week’s quote from Pilot’s January. Today, a change of decade and a random jump to 1991, the year I moved to the City and one of mostly musical dross. This, though, is from the year’s hidden gem: “I know it’s hard and sometimes you can get discouraged”.

FPC63
All charts and data sourced from FactSet