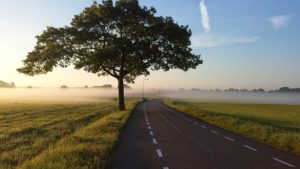 August is frequently an indecisive month. Heatwaves one day, thunder storms the next. Financial markets can seem asleep, with so many away on holiday. Equally, events have a funny tendency to happen in these dog days of summer. This is probably no more than the law of averages (we have the same birthday, what’s the chances of that? About 1 in 365?). But August always has a funny feel to it.

This may be because I am quite old enough to remember the early 1990s. The decade did not have the greatest of starts for those who take time away in August. 1990 was the year in which Saddam took it upon himself to invade Kuwait, and so triggered what we now know as the First Gulf War. Let us not be side-tracked by the Second, no matter how tempting that may be.

The following year we had not one, but two Russian coups to deal with. In the first, the extraordinary Mikhail Gorbachev was given the big heave-ho by traditionalists disaffected by his openness to change. It was the most pyrrhic of victories since probably Pyrrhus, with the unforgettable Boris Yeltsin rallying a populist, democrat reversal of the first coup.

2020 has been quite weird enough without August throwing anything else our way this year. Last week’s data showed economies in most of the world are clawing their way upwards. The quick rebound though has happened and progress is becoming ever harder. It is important though that it is still ‘progress’. Despite the persistent tendency of the news reports towards sensationalism, economic activity is gradually rising almost everywhere.

Amongst the most popular measures of economic well-being are the Purchasing Managers’ Indices, or PMIs. These provide a month on month gauge, for both the Manufacturing and Services sectors, and they are currently showing a quietly optimistic picture. In Europe, for example, both sides of the economy (manufacturing and services) are growing for the first time in 18 months. Yes, it is from a base immensely lower than anyone would ever have thought, but the direction of travel (apologies, that is a horribly over-used phrase) is good.

Last Friday, the monthly update to the employment statistics in the United States showed that another 1.7m Americans have found jobs. The unemployment rate is still just over 10%, but that is half of its peak. Again, it may be hard going from here, but it is at least going the right way. The early data from the UK’s ‘eat out to help out’ also looks optimistic, but comes with some large caveats. The most prominent of these is the as yet unknown extent to which eating out has merely changed days of the week: from the traditional weekend to Monday, Tuesday, Wednesday. (US data source: US Department of Labor).

Tomorrow we shall see the latest update to the employment situation here in the UK. It will not be easy to make sense of the data. The numbers of unemployed are rising, of course, but the picture is almost completely obfuscated by the furlough scheme. The current unemployment total is reported at around 1.4m people. The furlough total is 9.6m. So that would appear to make 11m effectively out of work. That would be a third of the workforce.

All is rarely what it seems. And this is especially true of official statistics. The furlough statistics are actually less than helpful. The government, possibly to show how effective the scheme has been, publishes only the total number of cumulative claims that have been made. As at 2nd August that was, as we said above, 9.6m. The missing part of this is how many people are currently on furlough. And in response to my request for this, the statistics department of HMRC has kindly clarified that this is not published.

What this means is that neither we, nor anyone else, has any idea how many are currently on furlough, nor what the true unemployment picture is in the UK. The Bank of England has suggested a peak unemployment rate of 7.5% as a reasonable working assumption. That sounds horrible, but is actually well below the last three major peaks of the early Eighties, Nineties and Noughties. (UK data sourced: Office of National Statistics). Until the furlough scheme ends, though, we are fumbling in the fog.

The usual well done to everyone who got last week’s references to Peter Green. Today, sticking to the monthly theme, which August denied being a parent to either Ms Oakley or Ms Lennox?

The AA plc, past 3 years. In the sights of private equity. 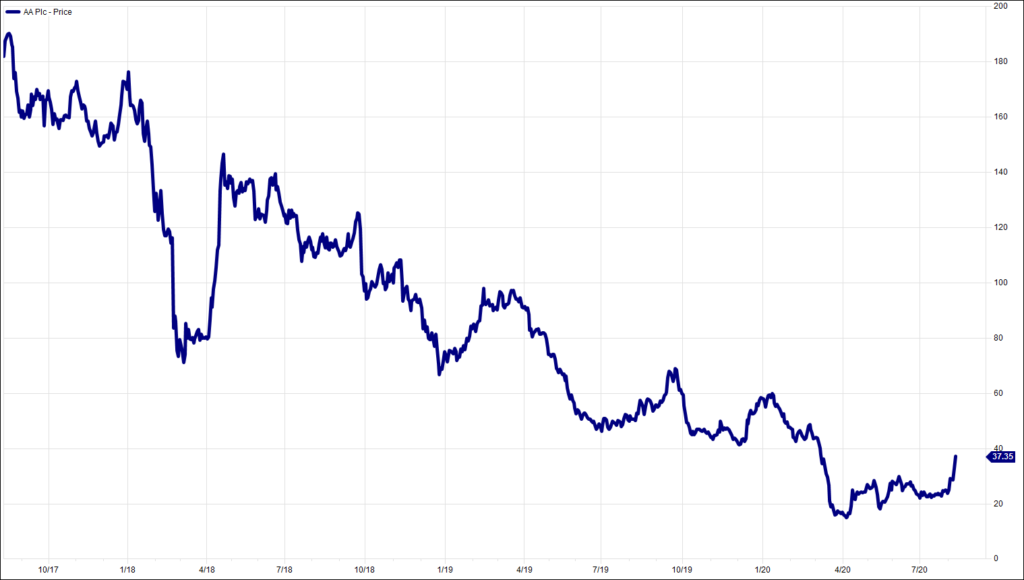 HA804/267
All charts and data sourced from FactSet