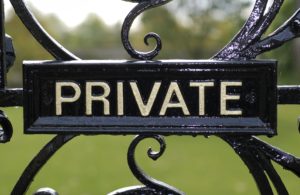 The private equity sector has been on a tear over the past six months.

In fact, the private equity sector has been on a tear for about 30 years – just look at Hg Capital’s performance since 1995 (as far back as the FE data goes) vs UK equities! 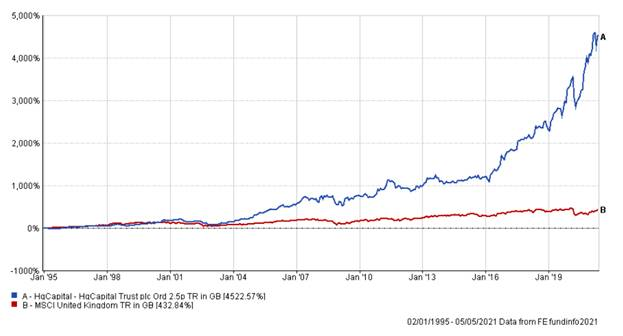 The majority of private equity trusts only report their net asset values (NAVs) every 3 to 6 months, often with a delay of a month or two as the accountants sift through the numbers. This means the share price rating (whether a trust trades at a premium or discount to the stated NAV) is always backwards looking. When you consider the impressive long term returns that the sector has generated over decades, and the conservative way the NAVs are valued (private equity disposals consistently achieve a significant premium to their stated value in the NAV), it is baffling that to this day investors can still buy private equity trusts on material discounts to these backwards looking NAVs. We believe they should trade on premiums that reflect the scarcity and quality of the businesses that they own, and the huge, consistent, and persistent long term value creation that these trusts have achieved, in part by having significant influence in the running of their underlying companies without the scrutiny of public markets and the obsession with short term earnings reports.

Now, not all private equity trusts trade on discounts. The new breed that have come to market in recent years have tended to enjoy premium ratings – as they should. Augmentum Fintech and Chrysalis, both of which are held in our Global Opportunities Fund, own some of the most exciting companies on the planet, have delivered exceptional NAV returns, and both trade at premiums. Despite stellar returns, their NAVs will likely prove to be materially understated in time as a number of their holdings are ripe to list on public markets over the next 18 months. Of the long established trusts, Hg Capital has also achieved a premium rating, but only relatively recently. It was one of the Vanbrugh Fund’s longest held positions, owned for more than a decade, before we sold it last year after the underlying portfolio had re-rated aggressively and the price had moved to a premium.

One of the biggest positions in all three of our Funds, Oakley Capital, is a direct investor. But unlike Augmentum, Chrysalis and Hg, it trades on a whopping 22% discount to the NAV as of the end of December 2020. The trust has grown NAV at a compound annual growth rate of 16% over the past 5 years (to end December), including 18% growth in 2020 despite having a number of businesses that were impacted in the shorter term by lockdowns. These businesses are set to do very well as lockdowns ease. Indeed, one such (listed) position in Time Out Group (c.7% NAV as at December) is up a cool 63% already this year, and around 10% in the last week. That pushes the 22% discount to 26% before the rest of the portfolio is even considered. Meanwhile, the underlying portfolio itself is very conservatively valued at 11.8x EV/EBITDA (compared with over 22x for Hg!). It is far too cheap, has huge re-rating potential, and we are very excited about the trust’s prospects.

More broadly, despite a glut of strong NAV releases from the sector covering the final quarter of 2020, there is plenty more petrol in the private equity tanks (or charge in the batteries for those who’ve shifted to EVs). The US private equity behemoths report ahead of the UK listed private equity investment trusts, and offer a guide for things to come. In the first quarter of 2021, Blackstone has announced a 15% return from its private equity division. That is the 2nd best quarterly performance recorded in the division’s history! Carlyle Group (Hawksmoor’s new owner) also reported a 15% rise. This week KKR joined the party and blew them both out of the water, with a 19% rise.1 At the micro level, transactional evidence has picked up. Yesterday, Global Opportunities’ holding Schroder UK Public Private announced two disposals, and a valuation adjustment for Oxford Nanopore following a new funding round, that combined add around 13% to NAV.

In a world of eye watering valuations across many mainstream asset classes, the fact that we can still access high quality, attractively valued private companies at a material discount to their true value is great news. Investment in this asset class can only be achieved via investment trusts due to their closed-ended structures and gives investors like us an advantage over those only using open-ended funds or ETFs for their investments. 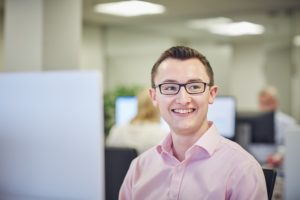 This financial promotion is issued by Hawksmoor Fund Managers which is a trading name of Hawksmoor Investment Management (“Hawksmoor”). Hawksmoor is authorised and regulated by the Financial Conduct Authority. Hawksmoor’s registered office is 2nd Floor Stratus House, Emperor Way, Exeter Business Park, Exeter, Devon EX1 3QS. Company Number: 6307442. This document does not constitute an offer or invitation to any person, nor should its content be interpreted as investment or tax advice for which you should consult your financial adviser and/or accountant. The information and opinions it contains have been compiled or arrived at from sources believed to be reliable at the time and are given in good faith, but no representation is made as to their accuracy, completeness or correctness. Any opinion expressed in this document, whether in general or both on the performance of individual securities and in a wider economic context, represents the views of Hawksmoor at the time of preparation and may be subject to change. Past performance is not a guide to future performance. The value of an investment and any income from it can fall as well as rise as a result of market and currency fluctuations. You may not get back the amount you originally invested. HA4295