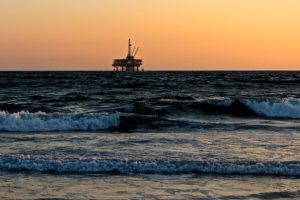 Our recent paper, Net Zero, asked testing questions of the oil & gas industry. Scientists tell us the world cannot afford to burn more than one-third of known oil reserves: so how flexible can oil firms be in adapting to a low-carbon economy? This follow-on paper considers a clean transition for one of the world’s most controversial and important industries.

Do they mean it?

The production and use of oil and gas accounts for over half of the global greenhouse gas emissions associated with energy consumption, representing more than 17 billion tonnes of carbon dioxide equivalent per year. With climate concerns moving up the policy agenda, oil majors’ public relations efforts try to convince the world they are not enemies of the people. BP in 2000 spent $211m on its clean green ‘helios’ logo, while Royal Dutch Shell’s website now welcomes visitors with a “Getting to net zero emissions” article from their Chief Executive.

Yet talk is cheap. Shell’s Board cast that green message aside when in June 2019 it announced a $30 billion per year development budget aimed almost entirely at the exploration and production of fossil fuels: deep water, shale and conventionals. Indeed, Shell tells us it will ‘fully sustain’ its Upstream business for the next decades. The accusation is that the oil majors pay lip service to a low carbon future yet in practise are unwilling to change.

On paper at least, oil companies’ competences should be transferable. Engineering expertise on a little platform in the ocean? There’s some commonality between offshore wind and deep water oil rigs. The majors also typically already have an established presence in the Middle East and other regions teeming with solar potential.

Nonetheless, Shell is reluctant. During a press interview in October 2017, its CEO said: ‘…we were among the first of the big international oil companies to get into solar and we found out we could not make any money out of it’. Similarly, BP Solar closed down in 2011 after forty years of operation also citing that it did not make any money. The majors have had their fingers burnt in alternative energy projects: identifying the technologies and business models that will succeed is a major source of risk.

The industry expects fossil fuels to remain a major part of the energy mix in 2040, despite the growth of renewables (Chart 1). Demand for energy will continue to rise due to global population growth and higher living standards in emerging economies. There are intermittency issues with renewables on cloudy, windless days – and note that gas at current prices is three times cheaper than electricity for heating homes. Oil will also still be needed for many of our materials and chemicals. And even on the most optimistic projections of 500 million electric vehicles by 2040, there would still be three times as many internal combustion engines on the road craving oil 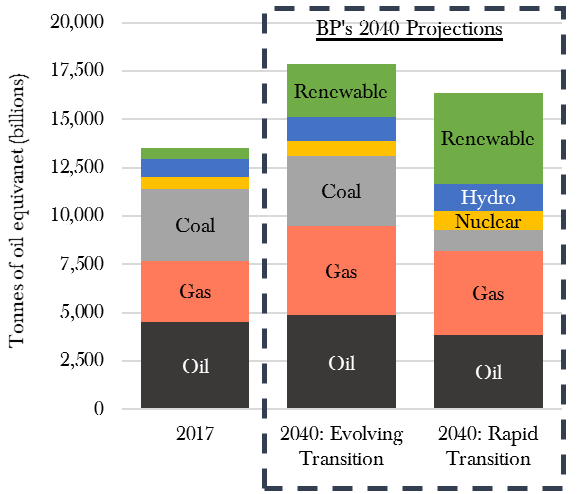 This debate condenses to one of speed of change. How long will fossil fuels remain core to our energy needs? How rapidly can the world transition to clean and green?

On the one hand, history suggests that energy transitions take a long time.  Coal took 84 years (1830 to 1914) to increase its share from 5% to 60% of the energy mix.  Oil’s rise from 1% to 40% took from 1890 to 1974.  Nuclear, which was non-existent in 1954, has only managed a crawl up to 2% since.  Energy shifts require new infrastructure build and are prone to the sunk cost fallacy of existing operators. New technologies take time to improve performance and competitiveness.  For all the promise of renewables, it will take time for their ascendency.

That said, we might also readily come up with plenty of examples of how innovations are picking up pace: fifteen years ago, for example, the term ‘smart phone’ did not exist.  Furthermore, one might reasonably argue extrapolating the past is misleading because this energy transition is driven not by the invisible hand of opportunism, but by problem solving’s fist.  Policy changes by governments, including incentives or outright bans of harmful activities, can be far quicker in forcing through change.  Ultimately, this is a test of the resolve of those 195 signatories of the 2015 Paris Climate Change Agreement to limit global warming.

Crucially, renewable energy has now hit an inflection point: projects make economic sense even without subsidies. The cost of offshore wind has fallen 23% since 2010; for solar photovoltaic electricity, the figure is 73%.  The International Renewable Energy Agency (IRENA) reports that wind and solar projects can deliver electricity for as little as $0.03 per kWh, which is price competitive against the $0.05 to $0.17 achieved by fossil fuels.

In the CDP’s league table below, the Transition Risk rank considers the current portfolio mix and emissions intensity, while the Physical Risk rank assesses facility-by-facility stress issues, such as fresh water withdrawal intensity.  Transition Opportunities examines the extent to which these firms invest in low-carbon assets and research, and their financial flexibility to do so.  Finally, the Climate Governance & Strategy rank looks for emission reduction targets, stress testing against a low-carbon transition and the alignment with remuneration. 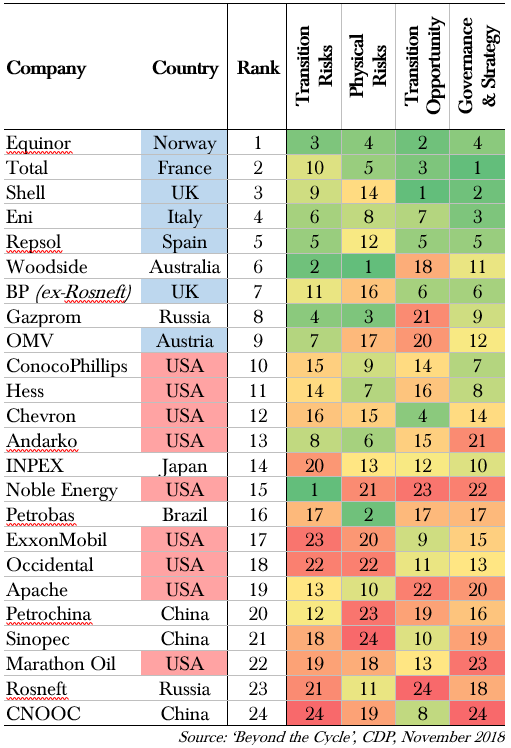 This league table is one of relative ranking: while we might conclude that Shell and BP could be doing more to reduce their carbon-related risks, we can also say that they are both in a far better position than Exxon.  For the sector as a whole, however, note that just 1.3% of total capital expenditure is allocated to low-carbon investment.

Notice too that there is an intriguing regional divide: European majors (highlighted blue) seem better prepared than our cousins across the Atlantic (red). Indeed, the CDP notes that across the 24 companies, European firms account for 70% of current renewable capacity and nearly all capacity under development.  We suspect it is no coincidence.  Given that the current US administration pulled out of the 2015 Paris Climate Change agreement, is it any wonder that US firms take low-carbon planning less seriously?

Underneath the PR spin, a significant component of this green embrace is natural gas.  Natural gas emits less carbon dioxide when burned than coal, diesel, gasoline or propane.  That’s convenient for firms with emission targets, like those higher up in the CDP’s league table. Total, for example, puts gas as the cornerstone of its transition strategy with a target of 60% of the mix by 2035.

Yet natural gas is still a fossil fuel.  What’s worse, burning natural gas releases methane, which is a far more potent greenhouse gas than carbon dioxide.  There is as such still a huge regulatory risk hanging over its production.

One’s views on the energy sector’s future are intricately linked with the pace of change to a low-carbon economy.  The set of potential outcomes in terms of the evolving energy mix for the coming decades is broad, especially since so much depends on the extent and urgency of policy responses.  We see increasing regulatory risks for the sector as governments around the world introduce more stringent climate policies, such as the 2050 Net Zero target in the UK.  The pace of that change depends on their level of commitment to achieving the goals of the 2015 Paris Climate Change Agreement when faced with the difficult and costly decisions that that demands.

The world is changing.  As with any sector, we prefer to invest into businesses that have the flexibility to adapt.  The positioning of the European majors in terms of the current risks in their project portfolios, exposure to opportunities in green energy and alignment on governance tools is far stronger than that of their American, Russian or Chinese counterparts.

Moving beyond their core business is risky for oil companies, though so too is failing to be ready for change.

Health Warning/ Disclaimer
This document does not constitute an offer or invitation to any person, nor should its content be interpreted as investment or tax advice. The information and opinions herein are compiled from sources believed to be reliable at the time of writing and are given in good faith, but no representation is made as to their accuracy (completeness or correctness). Any opinion expressed in this document, whether in general or both on the performance of individual securities and in a wider economic context, represents the views of Hawksmoor at the time of preparation and may be subject to change (past performance is not a guide to future performance).