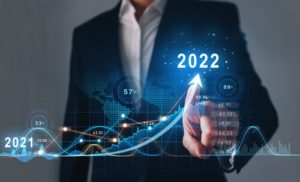 Albeit slightly late, may we wish everyone a very happy, prosperous and safe 2022. Much water has flowed under many bridges since we last opined on markets and the state of the world and, although it may seem that the mists of confusion are still swirling, the future has become clearer.

First, let us look at inflation. The idea of a self-correcting spike has long since passed. Tomorrow it is expected to be confirmed that the headline CPI in the United States has reached the heady height of 7%, and with precious few signs of an imminent slowdown. The Federal Reserve has hardly roared into action in response, but has notably changed the tone of its rhetoric. Interest rates in the US are still zero and the Fed is still buying bonds, so one may argue that the pumps are still running at almost full speed. The change is that said buying of bonds (the ‘QE’) will be wound down in the first quarter of the year and will cease by the end of March. Interest rates will rise – that is certain – and the intelligentsia of Wall Street are currently arguing whether there will be two, three or four increases this year.

The Bank of England has already raised our interest rates. You can, though, be forgiven for having forgotten, or for even not having noticed. Bank rate has been increased from 0.1% to 0.25%. It is hardly something that is going to cause savers to break out the bunting and head off on a world cruise, but it probably counts as a statement of intent.

What is undeniable is that the cost of debt for everyone – governments, companies and individuals – will be higher this year than last. In previous cycles, the likely increases could have been treated as being inconsequential. The problem is that history is not a great guide to 2022, where the amount of debt turns even the smallest rise in its cost into a significant change. Market reactions will wax and wane, as we have seen already. The Fed’s first suggestion that it was minded to be rather more proactive was initially met with a thumbs up. Its subsequent hints that it actually means what it says have prompted a raspberry. Such are markets.

We have not even mentioned Omicron yet. In what should be a statement of the obvious, the markets’ reactions to the news reports are variable. There is one school of thought that says that lockdowns will have to happen, and another that argues that because Omicron is possibly a milder variant, that it marks the end of the lockdown era. Reality is probably a bit of both: longer-term relief balanced by short-term risks.

Despite the rise in the volume of the daily noise in markets, as we said at the outset there are some aspects that are becoming clearer. In real terms, bonds represent poor value of historic proportions, meaning that real and nominal yields will rise. Our recommended bond weightings are at the lowest levels allowable within our asset allocation rules, a position with which we are very comfortable. Secondly, Omicron should mark the beginning of the end of the pandemic, and certainly the end of the time when lockdown was the policy of choice of most governments (we do note that China’s policy is still severe).

The rises in borrowing costs will favour companies with strong balance sheets. Equally, the levels of inflation are strongly favouring those companies with pricing power – the ability to be able to raise selling prices without affecting demand – at the expense of those unable to do so and inevitably seeing lower margins. Higher borrowing costs also affect speculators: as another statement of the obvious (or even a repetition of a truism) – it costs them more to borrow in order to speculate. We are already seeing some of the fall-out from this, with big drops in the share prices of the riskiest and most highly valued technology stocks in particular.

Thankfully this is not our game. We remain focussed on global leading businesses, with pricing power and strong balanced sheets. This may not be the most exciting game in town, but for that we are grateful. It gives our portfolios good protection against the threats of high inflation and rising interest rates, a position that is reinforced by our selective exposures in Property and Infrastructure, of which we will write much more in coming weeks.

Finally, our last quote of Joe Jackson’s Stepping Out was probably so far back that everyone has forgotten. We start this year with a most curious coupling of words: “serious moonlight”. What is the song, and who wrote it? Both should have known better.

FPC26
All charts and data sourced from FactSet