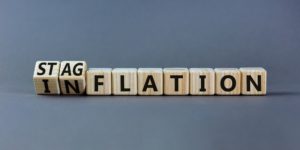 It is slightly over 170 years since Thomas Carlyle first dubbed economics as ‘the dismal science’. It is hard to argue. Economics is something that people only worry about when it is going wrong. When all is good, we are Jiminy Crickets, giving a little whistle and spreading a little happiness as we go by. But when the darkest clouds are in the sky we reach for our economics text books and start to write about how terrible things have been wrought upon us by the Central Banks, the high street banks, the government, the French, the Chinese, the Russians, the Saudis, the Americans, Simon Cowell and probably poor Uncle Tom Cobley.

Without taking us down a blind alley of economic history, my point is that financial markets are in their current state of flux trying to work out how they should best deal with one of the most dismal of all economic horrors: stagflation. Unlike ‘the dismal science’, the origin of stagflation is unknown. Like almost all portmanteaux, it is a ghastly conglomeration of its two components: stagnation and inflation. Neither should be on anyone’s annual letter to Santa.

Last week we referenced the Bank of England’s latest expectation that the UK’s inflation rate is likely to reach 10% in the not too distant future. Tomorrow’s monthly update is expected to show the latest calculation of the annual rate at 8.9%. So only another 1.1% to go. Last week the markets gave a minute’s sigh of relief that the rate in the United States was only (only?) 8.3%.

The ‘flation’ part is a full confession and guilty plea. The evidence for the ‘stag’, especially here in the UK, is building. Last week’s monthly update by the Office for National Statistics stated: “Gross domestic product…fell by 0.1% in March 2022, after no growth in February 2022”. Now this comes with the caveat that actually no one has any idea whether the economy is currently growing or shrinking, nor will they have for several years. Honestly. This is another tangent that we resist, but national statisticians revise their data for years after we, the public, get to see their guesswork. There is a second caveat, that GDP growth is always reported in ‘real’ terms, after an adjustment for inflation (which, just for fun, is a different inflation to the Consumer Price Index).

Those are the niceties. The reality of the current stagflation is that the price of pretty much everything is going up (and where it isn’t, ‘inflation’ is being used as an excuse to raise the price anyway), while the overall UK economy is ticking over. In the United States, their first estimate of how the economy performed in the first three months of the year showed a fall of 1.4% over the previous quarter (dependent upon how one calculates annual rates).

There is though just the outside possibility that everyone is excessively gloomy. The strong majority of companies, in all walks of the economy, that we speak with or listen to are reporting that trading is pretty good. Certain parts of retail are struggling, especially in the UK, but beyond this business activity strikes us as being good. Let me repeat three comments from last week’s interim results announcement by Compass Group: “We continue to recover strongly…We have seen a notable improvement…Net new business growth has been excellent, particularly in North America and Europe”.

Markets are fearing recession. Bond yields should be much higher, the reason why they are not is that the markets think the Central Banks will have to start cutting interest rates again quickly. The falls in equity prices and valuations that we are seeing are not because of what is happening on the ground now, but what might happen in the autumn or next winter.

It is very easy to get caught up in the narrative of investment markets. Equally, there are dangers in catching falling knives, or relieving oneself against the prevailing wind. The mood of the markets is not going to change anytime soon, nor are we likely to have the worst of things. But that does not necessitate a state of permanence. Good companies, indeed great, global leading companies, are trading on valuations that are rarely seen. This is not time to be throwing the grandchildren out with the bathwater.

Finally, well done to everyone who knew last week’s Minnie Riperton lyrics. Today, we move forwards a touch to one from the cinema that shouldn’t present any problems: “Watching every motion in my foolish lover’s game”.

FPC301
All charts and data sourced from FactSet