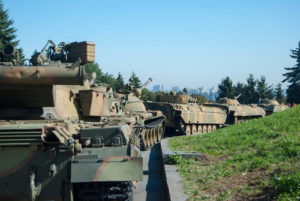 Today is one of those few occasions when reporting on financial markets takes a degree of gravitas beyond the usual daily wheeler-dealering of the trading floors. It is also a reminder that extreme events can and do happen. Of all the possible scenarios that have been building over the early weeks of 2022, a full scale Russian invasion of Ukraine was the least likely. But the Devon Loch of European politics has unfolded in front of our eyes.

Our Asset Allocation Committee met this morning to discuss and debate our response to the events in Ukraine. This was a deliberate delay from last week, on the basis that a little more time would allow events to develop more clearly and let us have a more balanced, and less knee-jerk, reaction. Perspectives have swung wildly over the past five days. The initial shock of Thursday’s first news of the invasion morphed into a powerful rise in equities on Friday, pinned on the hopes that the sanctions imposed on Russia would not cause economic pain in the West.

Financial markets can be brutally cold at times. For them, especially from an American perspective, the best outcome would have been a swift and successful invasion, followed by pro-Moscow regime change. A limited number of token sanctions could be flaunted, and in a couple of months everyone (other than in the Ukraine) could move on.

Come Monday morning, that view looks grossly simplistic. The possible outcomes are now seen ranging from nuclear war to regime change in Moscow. Putin has without doubt threatened the former, while students of modern Russian politics will know that externally hostile moves by Russia (such as the invasion of Afghanistan in 1979) may arise from battles within the Kremlin. It is possible, but admittedly unlikely, that Putin has invaded out of weakness, not strength.

When outcomes are this extreme and uncertain, experience teaches patience. It is important to admit that we know neither how the situation will be resolved, nor how long this will take. As much as this might feel that we are avoiding addressing the issue, it is much more a pragmatic stance of ruling nothing in, nor out. Short of nuclear war, the greatest risk facing the value of investments is inflation, and the greatest challenge of investment managers is how to preserve, or even increase, the real value of the assets entrusted into our stewardship.

There are a number of issues on which we can have a strong degree of confidence. News flow will ebb and flow, and markets will be dragged from pillar to post by the daily noise. This should be a statement of the obvious, but above all we should all be prepared for large daily movements in markets, which will swing from the alarming to the euphoric. They are the classic twin imposters.

The key though is the ongoing supply of oil and gas. It is perplexing to say the least that Putin can threaten nuclear attack on NATO, but continue to supply essential energy to the same enemy. Should Putin turn off the taps – which is quite possible – markets will react very badly. That would be a de facto attack on NATO and would provoke, almost certainly, a NATO military response. At present, thankfully no one appears to want this. The West will up its rush to develop non-Russian energy sources. Part of this will be renewable, undeniably, but in the United States in particular we see a revitalization of the shale industry. When faced with an atomic warhead, climate change can take a back seat.

The Asset Allocation Committee meeting saw at least as much opportunity as threat. The former is also wide-ranging. We are seeing world class businesses trading at the most attractive valuations for a very long time. We see a renewed interest in gold as a genuine (and non-crypto) safe haven; although we should also add that investors, so far, have largely avoided a dash into the traditional safe havens. The gold price has risen a little, as has the US dollar, while bond yields are largely unchanged over the past fortnight.

There is a challenging debate to be had over the role of ‘ESG’, or what may be summarized as ‘investing for good’. This has thus far tended to treat defence and armaments businesses as off limits. The arguments have become much more complicated over the past week: is there a difference between a Russian and a Ukrainian missile? Whilst that argument rages, over the weekend there has been a change in German foreign policy that is potentially pivotal, and it is possible that we are at the start of a major upswing in global defence spending.

On the other hand, association with Russia has become toxic. Doubtless BP has been wrestling for some time with how to extricate itself from its investment in Rosneft, a company with famously close association with Putin. But no matter how one frames it, BP’s decision to effectively walk away from an investment measured in tens of billions of dollars is staggering. In the absence of regime change in Russia, it is also very hard to argue that it is not the right thing to have done.

Our portfolios have had very little direct exposure to Russia. Russian equities have made up a limited amount of some of our favoured emerging market funds, with even the largest weighting being less than 10%. Russian bonds have also made up only a minimal amount of our investments in emerging market debt.

Our conclusion is that we, nor anyone else, can prejudge the rapidly evolving and dramatic events. The one certainty is uncertainty. Our portfolios are positioned for an era of rising and higher inflation, which events in Ukraine will only amplify. In the short-term, as we have argued for a number of weeks, we all need to be prepared for shocks, both good and bad. Our strong inclination is that the latter will increasingly present attractive investment opportunities.

Finally, Ian Dury retains an enduring popularity and well done to everyone who knew the opening lines to Rhythm Stick. Today’s opener is from the same era: “You spurn my natural emotions”.

FPC118
All charts and data sourced from FactSet