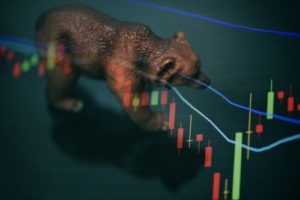 Mrs Johnson’s lip-read commentary on the Jubilee Pageant is a slightly far-fetched illustration of why it is likely that we have yet to see the worst of current markets. Nonetheless, it is still a relevant encapsulation of why equity markets are still falling. The problem is that investors have yet to become bored and to want to leave. Au contraire. There is lingering optimism that good news, if not around the corner, is at least still in town and bound to show its face sooner or later. Experience and history say that it is only when investors have decided the time has come for the throwing in of the towel that markets are likely to turn around.

This time last week we were warning that Friday’s monthly update to American inflation had the potential to cause a nasty shock. Our far from complex thinking was that markets were over-optimistic in thinking inflation was peaking, or had even peaked, and that the Federal Reserve could happily shepherd the economy to lower inflation without having to go through Farmer Recession’s fields. The reported headline rate of 8.6% triggered a hasty reality check and markets ended the week on a decidedly sour note.

As much as we may wish this were not the case, Mrs Johnson’s lesson is that markets are likely to become worse yet. This is their nature. It matters very little that it is possible now to buy global leading businesses (and businesses that will continue to lead the world) at valuations not seen for a long time. Microsoft, for example, is currently trading on the same valuation as in early 2018. Unilever, as a second example, has retreated to the same rating as 2012. We would have great confidence that buying either at their current prices will, over time, prove to be highly profitable. The challenge is that both share prices are almost certainly going to fall further in the meantime.

We very rarely write about so-called ‘crypto’ currencies or assets, and thankfully we are very rarely asked about these. If only to make a change from inflation, this is arguably a good week to set our stall on these. It won’t take long. Since the markets’ first nervous dalliance with bitcoin, which probably started in earnest in 2017, we have been open to persuasion for why a crypto coin should have any value. We are still waiting. And expect to keep waiting. Indeed; we are more likely to spend a weekend Chez Godot with all Godot’s family than we are to find a credible explanation for investing into crypto currencies. To us, these are the ultimate assets of speculation. Their value is determined entirely by the balance of buyers and sellers. Once the former evaporate, the value is nil.

Last week the European Central Bank made three promises. First, it will end its programme of buying bonds. Secondly, it will raise its interest rate by a quarter point in July. Thirdly, it will raise the rate again by either a quarter or half point in September, once they have all come back from holiday after taking August off. While one may reasonably query why we should wait until September to do what needs doing today, the markets have been alarmed by the Bank’s apparent lack of planning for a new Grexit, or similar. One of the direct effects of European quantitative easing has been to greatly narrow the difference in yield (the spread) between the safest bonds – deemed to be Germany – and all others. First amongst equals in the ‘all others’ is Italy. In a post QE-world, Italy again becomes Italy, Greece becomes Greece. Countries have to stand on their own feet again. The question being asked, is where that now leaves the investors, and potential new investors, in Italy, Greece, Portugal, or anywhere. The ECB appears not to know, and that has not gone down well.

This week it is the turn of the Federal Reserve and the Bank of England to show their colours. They are expected to raise their respective interest rates by a half point and a quarter point on Wednesday and Thursday respectively. Anything different would be a shock. In this current unsettled climate, every word and every punctuation mark in the accompanying commentaries will be pored over in a fruitless search for the hidden truth of whether inflation can be brought under control without having to visit Farmer Recession’s pastures. No one will be any the wiser, though many will believe different. As we say every Monday, it is going to be another bumpy week.

Finally, well done to everyone who remembered Men At Work’s catchy ditty. Today, we move forwards three years to 1983 and a cinch. “Turn around bright eyes”. 5 years after Art Garfunkel’s career low, this one has (almost) nothing to do with rabbits.

FPC350
All charts and data sourced from FactSet