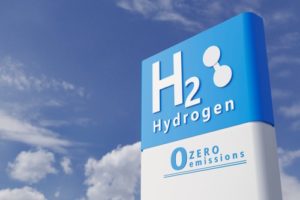 With an atomic number of just one, hydrogen sits at the top of the periodic table. It is the simplest element and is believed to account for roughly 74% of the visible universe. Its role as a source of clean fuel in an ever-changing world could be transformational. Hydrogen production is a fascinating and rapidly evolving technology which has great investment potential. As we discuss below, we believe the diversified structure of an Exchange-Traded Fund (ETF) is the best means of providing exposure within portfolios. But first, let us examine the merits of this so-called fuel of the future.

You may hear hydrogen being described as grey, blue or green. You are forgiven for being confused as to how an invisible gas can be referred to in such a multitude of colours. The colour codes are used within the energy industry to distinguish between the different types of methods used to produce that hydrogen.

There are four main sources of commercial hydrogen production: natural gas, oil, coal and electrolysis. A quick look at that list and it is easy to separate the fossil fuels.

Grey hydrogen is produced from natural gas, oil or coal; carbon dioxide (CO2) is generated as a by-product and released into the atmosphere. This is by far the most common method of producing hydrogen.

Green hydrogen is produced using electrolysis. A current is passed through an electrolyser that separates water into hydrogen and oxygen. Importantly, this process is powered by renewable energy and is therefore free of greenhouse gases, making it the cleanest method of production.

To combat climate change we need to increase the supply of renewable energy. Wind and solar play key roles and have scaled up significantly in recent years. However, they are still reliant on weather conditions and therefore may be underproducing or overproducing at any given time. A system of storing energy when a surplus is being produced is one way to smooth the imbalance. A hydrogen storage facility could store larger quantities and for longer than its battery counterpart. It has also proven its merits in the real world – Markham Energy Storage Facility (North America’s first multi-megawatt power-to-gas facility) uses renewably sourced hydrogen to provide grid regulation services in Ontario, Canada.

In addition to its storage capabilities, hydrogen is a clean source of fuel. When used in a fuel cell it can generate power, producing only water and heat as by-products. Fuel cells work in a similar fashion to batteries but do not need to be periodically recharged; instead, they continue to produce electricity as long as a fuel source is provided. These qualities make them an attractive option for powering vehicles and portable power devices as well as heating homes.

Hydrogen is also being explored as a means to decarbonize traditionally ‘dirty’ industries. Currently, it is not practical to lower emissions in chemical and natural resources companies through electrification, so CO2 emission levels have remained high. There are a number of companies across Europe working on hydrogen as a solution.

Supplying hydrogen to industrial users is already a major business. The problem is that current methods are responsible for CO2 emissions of around 830 million tonnes per year – equivalent to the CO2 emissions of the United Kingdom and Indonesia combined, according to an International Energy Agency (IEA) report. Governments, industry, and investors will need to coordinate plans in the roll out of more climate-friendly hydrogen to scale up infrastructure development.

As with many technologies in the early stages of adoption, costs are higher than those of established production methods. Though the falling cost of renewable energy is making it cheaper to produce green hydrogen, the average cost of just over $5/kg is still significantly above that of grey hydrogen, which is roughly $1.5/kg. However, the Hydrogen Council forecasts that renewable hydrogen could break even with grey hydrogen before 2030 in optimal regions. This is down to increased utilization levels and falling capital expenditure requirements, although in less favourable areas the IEA suggests 2050 is a more reasonable target. 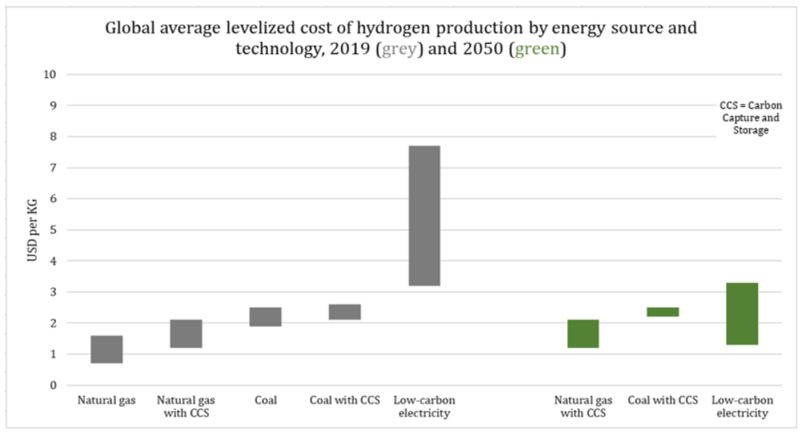 The final and arguably most important challenge is increasing investor confidence. Without investment the industry will fail to grow. New projects stand at the riskiest point of the development curve. It is vital that governments and the private sector work together to eliminate any unnecessary regulatory barriers and support research and development. Not only will that involve the use of public funds but it will also attract private capital.

Governments will play a major role in getting the widespread adoption of clean hydrogen on the right path. Already we are seeing policies put in place in a bid to hit net zero targets. President Biden, for example, has released infrastructure plans that include $10bn for clean energy innovation. The European Union has plans for at least 40GW of renewable hydrogen electrolysers by 2030, whilst Australia is funding AU$370m for new hydrogen projects.

Hydrogen is undoubtedly a hot topic but this is not the first time. In 2003, President Bush announced a $1.2bn hydrogen fuel initiative with hopes of reversing America’s growing dependence on foreign oil. The initiative included $720m in new funding to develop technologies and infrastructure to produce, store and distribute hydrogen for use in fuel cell vehicles and electricity generation.

Shortly before this hydrogen push, as the dotcom bubble burst, the share price of hydrogen stocks rocketed. In 2000, fuel cell stocks such as Plug Power, Ballard Power and Fuel Cell Energy saw tremendous share price appreciation only to see gains unwind in the subsequent years.

This time, hydrogen share price appreciation is being supported by three factors: policy decisions, industry disruption and green investment. Governments are putting hydrogen at the core of their clean energy plans. A report from the Hydrogen Council highlights that 75 countries representing over half of the world’s GDP have net-zero carbon ambitions and more than 30 have hydrogen-specific strategies. In the private sector, pressure is intensifying on corporations to cut emissions. Companies from oil majors to media firms are making significant changes to current operations in a bid to reach net zero. BP and Royal Dutch Shell, for example, are funnelling millions of dollars into hydrogen projects as they seek to redefine themselves. Environmental and Social Governance has moved on from being a side-line act to the main event, and investors are willing to put their money behind it. That creates a huge opportunity for hydrogen companies to attract funding and, with rates so low, financing is at more affordable terms too.

Hydrogen is currently a relatively small contributor to the global energy mix, but research provider Bloomberg New Energy Finance projects that its share could increase from 2% in 2018 to 13–24% in 2050. 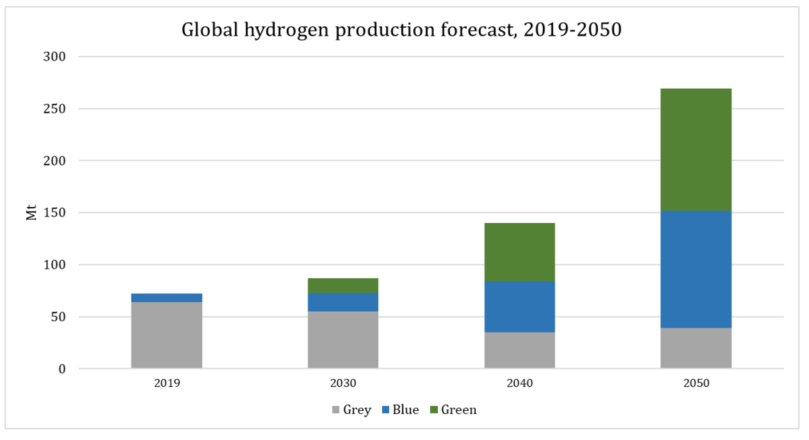 Industrial gas businesses, such as Air Liquide and Linde, operate leading hydrogen ecosystems. They build, own and operate assets with a focus on production and distribution. In collaboration with partners, new hydrogen applications are developed. These companies help tackle some of hydrogen’s biggest challenges – storage and transportation. Though seen as a high-growth opportunity, hydrogen tends to make up a small percentage of total revenue.

Storing hydrogen is complicated. It can be stored as either a liquid or a gas. As a gas it requires high-pressure tanks. As a liquid, it needs extremely low temperatures to keep it below its low boiling point. Hexagon Composites engage in storing and transporting hydrogen, though again, it is a small part of their business.

As discussed earlier, hydrogen fuel cells are used to generate power. The development and manufacturing of fuel cells is very specialised. These businesses are crucial to the chances of hydrogen power taking off. Though still at early stages, fuel cell technology is being tested in the transportation sector and successful trials could lead to increased demand. Ceres Power is an example of a UK fuel cell producer.

Plug Power is a great example. It provides alternative energy technology with a primary focus on the development of hydrogen and fuel cell systems. It recently started working on its third green hydrogen plant, with its reach now covering the majority of the East Coast of the US. This is essential for enabling commercial vehicle fuel cell adoption. The group could be a beneficiary of a larger scale hydrogen roll out, though this is somewhat reflected in recent share price appreciation. Note too that the group is loss-making and burning through cash. While there are mitigating factors – losses are perhaps to be expected when in the early stages, and Plug Power is leading the hydrogen ecosystem scale up – the losses bring risks.

Hydrogen is an attractive theme for a number of reasons. It is a clean source of energy with the potential to decarbonize high CO2-emitting industries, and it is being supported by government policies and backed by private investors alike. This creates a huge opportunity for market growth. However, picking an individual winner is difficult. Many pure play hydrogen stocks are currently loss making as the market still develops. Nevertheless, share prices enjoyed a good run through much of last year. Since peaking earlier this year they have moderated, creating a much better entry point. Other businesses with a vested interest in hydrogen tend to be less exposed to the theme. For industrial gas businesses, as an example, hydrogen is only a small part of the picture.

Our chosen way to gain exposure to the hydrogen theme is via an ETF. There are currently only two options within the market: L&G Hydrogen Economy ETF and VanEck Hydrogen Economy ETF. Our preference is for the L&G product, which is much bigger in size, offers a more diversified portfolio and has a less concentrated list of top ten holdings. That being said, this ETF slots into the upper end of the risk spectrum. Hydrogen is in the early stages of what could be the beginning of a super cycle. For those wanting to take that bet, this is a good option.

Health Warning/ Disclaimer
This document should not be interpreted as investment advice for which you should consult your independent financial adviser. The information and opinions it contains have been compiled or arrived at from sources believed to be reliable at the time and are given in good faith, but no representation is made as to their accuracy, completeness or correctness. Any opinion expressed, whether in general or both on the performance of individual securities and in a wider economic context, represents the views of Hawksmoor at the time of preparation. They are subject to change. Past performance is not a guide to future performance. Hawksmoor Investment Management Limited (“Hawksmoor”) is authorised and regulated by the Financial Conduct Authority. Hawksmoor Investment Management Limited is registered in England No. 6307442 and its registered office is at 2nd Floor, Stratus House, Emperors Way, Exeter Business Park, Exeter EX1 3QS. FPC62