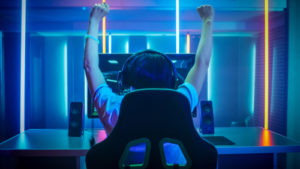 Even before governments put us all under COVID-19 lockdown, video gaming was one of the fastest growing entertainment sectors. Indeed, in January 2019 the Entertainment Retailers Association announced that sales of games in the UK had for the first time overtaken the combined sales of music and film1. It is estimated that video games are played in 7 out of 10 UK households2.

The market for video games is growing at an average compound annual rate of 9.0% per year (Chart 1). Yet with enforced confinement introducing new audiences to the hobby, that is likely to have increased. Jefferies’ April 2020 Global Survey found that 42% of respondents cited an increase in time spent playing video games since lockdown began (and <10% reported playing less)3.

Relatedly, with ‘real’ football matches postponed, last month Sky Sports instead streamed the ePremier League, a FIFA20 video game knockout tournament played by professional footballers4. For us, this is a remarkable demonstration of how universal quarantine has sped up eSports’ status upgrade from fringe to mainstream. 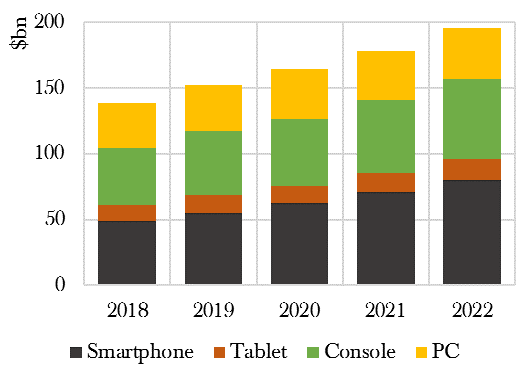 Video games are also something of a UK success story. Alan Turing may have kicked things off with his 1950s’ idea for an automated chess opponent, but today the sector employs over 14,350 roles in game development alone, making it one of the largest video game sectors in Europe5. This is also a notably national effort: 55% of those roles are outside of London and the South East, with large hubs in cities such as Leamington Spa, Guildford, Sheffield, Cambridge, Crewe, Edinburgh and Dundee6. Rockstar North, which employs some 600 developers in Edinburgh, is responsible for Grand Theft Auto V, the best-selling entertainment product of all time. This single game sold over $1 billion in its first three days – and over $6 billion since 20137. 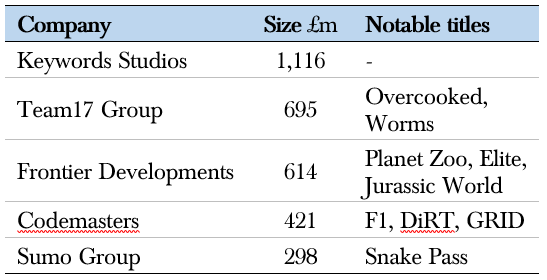 Investment opportunities into UK gaming companies are also increasing, with now five public stocks, all trading on AIM (Table 1). The smallest three companies in Table 1 all listed within the last three years. Meanwhile, it took Keywords Studios just 4 years to grow to over £1bn in size8. With both consumer demand and investor interest growing, we would expect additions to this list in the coming years, as well as a step-up in acquisition activity by the incumbents.

The success of the UK industry is aided in part by the Video Game Tax Relief (VGTR), a tax credit worth up to 20% of the core production cost of a game. As with all reliefs, there will always be the risk of the cookie jar being snatched away. That some of the world’s larger gaming corporations have benefitted too has been a point of controversy for the UK media9. However, the British Film Institute (BFI) calculates that every £1 invested in VGTR generates £4 in employment and other economic benefits. Around 95% of the industry are small or medium sized firms, and this is a major export industry. We flag restrictions to VGTR as an industry risk factor, though would expect government support to continue.

There are wider regulatory hazards too. Concerns of the potential adverse impact of gaming addiction on people’s health, finances and social lives led the World Health Organization (WHO) last year to add “gaming disorder” to its classification of diseases. At the sharp-end of practise is the alleged use of ‘persuasive design’: combining psychology and technology to alter ‘normal’ behaviours, keep consumers playing longer and spending more.

Some Asian countries (especially China), have already taken steps to restrict video games. There is always the potential for tougher restrictions to be introduced more universally, or even for future lawsuits from those whose lives have been severely affected.

Yet note also that this year the WHO recommended video games as a way of staying connected amidst social distancing10. So everything in moderation – though there is definitely a fine line for the industry to tread.

While the rewards can be tremendous, developing a game is an inherently risky venture. A so-called triple-A game requires a large team of highly skilled developers dedicated for several years. Codemasters PLC has a team of 500 developers: a typical game requires £20-30 million of development spending and 2-3 years to complete11. Note too that that is a cost absorbed before the game has made any sales. Historically the bulk of revenues would then be made in the first six months following launch: if the game flops, it can be crushingly expensive for development studios. As in the film industry, releasing sequels is usually safer than breaking moulds.

Helpfully, the transition from physical to digital sales greatly improves the economics of game development. There are several angles to this. First, distributing games digitally (via download or streaming services) cuts out a huge chunk of cost – printing, packaging, shipping, and the spotty teenager behind the counter. That means selling games is now a much higher margin activity. Second, a digital catalogue extends a game’s buying window: shelf space in a shop is limited, but online it is effectively infinite. Third, digitally connected games provide publishers with new sources of revenue, such as in-game purchases or upgrades. Importantly, this extends the duration of the revenue profile and de-risks cash flows for studios with a strong portfolio of established games.

Yet for investors wishing to sidestep the inherent make-or-break risks of development companies altogether, our ‘picks and shovels’ pick is Keywords Studios PLC. Rather than publish its own games, Keywords provides a range of outsourced services to the gaming industry (Chart 2). With game complexity and a propensity for developers to outsource both increasing, Keywords benefits from more development activity generally, without taking on so much idiosyncratic game risk. 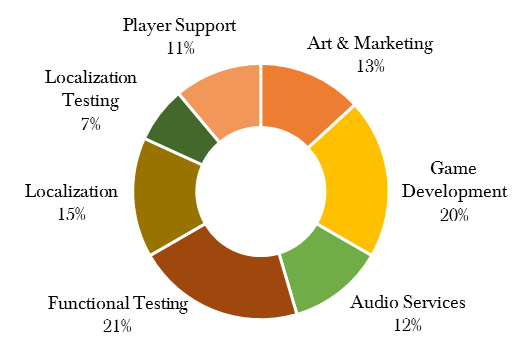 The Future is Here

Yet beyond the usual hardware cycle, we also stand on the foothills of new technologies and ways of playing. Virtual reality (VR) headsets, for example, are beautifully validating Moore’s Law: cheaper and more advanced at exponential rates. Though still in its infancy, VR is one of the fastest growing areas within the technology sector.

We are also seeing glimpses of life beyond consoles, such as Google’s game-streaming Stadia. This admittedly had a slow start, reportedly due to a limited number of titles, technical glitches and less stable performance than PCs/consoles. (We suspect one of the key ingredients for game-streaming will be 5G to improve bandwidth.)

Meanwhile, COVID-19 casts a shadow of uncertainty on every industry. On the one hand, gaming is a consumer discretionary sector: if the conclusion of COVID-19 is an economic depression, spending on new releases could easily be restrained. Yet on the other, gaming is one of the cheapest forms of entertainment: it thus tends to be relatively recession proof. From the companies we speak to, we hear that most functions have transferred well to home working. The challenge is greater where specialist equipment is required, such as audio recording. Some titles may be delayed, but the industry is as busy as ever.

For the longer-term, we suspect gaming is a COVID-19 beneficiary. Lockdown has introduced new audiences to interactive entertainment. It has also turbocharged the rise of eSports. Most importantly, though, it has upgraded gaming’s social and cultural role. Rather than an eccentric socially isolating hobby, it is today the exact opposite: a means to stay socially connected… at a safe distance.

We see a bright future for the UK video game sector from an ever-growing base of gamers, new technologies, and better business models from the digital transition. Already one of the fastest growing entertainment sectors, we argue COVID-19 adds fuel to that fire. There are today several world-class UK development studios listed, and we would expect that opportunity set to continue to grow.

Health Warning/ Disclaimer
This document should not be interpreted as investment advice for which you should consult your independent financial adviser. The information and opinions it contains have been compiled or arrived at from sources believed to be reliable at the time and are given in good faith, but no representation is made as to their accuracy, completeness or correctness. Any opinion expressed, whether in general or both on the performance of individual securities and in a wider economic context, represents the views of Hawksmoor at the time of preparation. They are subject to change. Past performance is not a guide to future performance. Hawksmoor Investment Management Limited (“Hawksmoor”) is authorised and regulated by the Financial Conduct Authority. Hawksmoor Investment Management Limited is registered in England No. 6307442 and its registered office is at 2nd Floor, Stratus House, Emperors Way, Exeter Business Park, Exeter EX1 3QS. HA3811

10 “Mental health and psychosocial considerations during the COVID-19 outbreak”, WHO, 18th March 2020