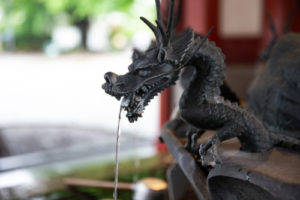 Where is Saint George when you need him? There are some old dragons that refuse to be slayed and are rearing their ugly faces in an unwelcome and fire-breathing way. Last week we looked into the eyes of Brexit. This morning, we stare at lockdown.

The so-called second wave of COVID-19 infections has finally been noticed by equity markets. As I type this ahead of Professor Whitty’s and Sir Patrick Vallance’s update, European indices are close to 3% lower, while the futures are indicating a 2% or so opening fall on Wall Street this afternoon.

By the standards set in February and March, these moves are modest. And rightly so. Lockdown is no longer the scarily unknown prospect that it once was. We have been through three and a bit months of draconian restrictions and know what the worst case looks like. It is not something that one would take home to tea with mother. Indeed, the first lockdown caused the greatest economic shock that any of us will see, short of an interplanetary collision or a ‘whoops, I didn’t mean to press the red button’.

So we are not going to repeat that. A nationwide stay-at-home edict is not viable. What we shall have instead is a period of regional stop-goes, or what important people have started to call circuit-breakers. This makes sense. Something must be done, but well short of a return to the days of April, May and June.

Without a vaccine, or a treatment, then we all have to catch COVID-19 at some stage. The hope or intention is that by delaying these infections as much as possible, the virus will have mutated into something less deadly. If not, then it is unfortunately a matter still of spreading the fatalities over a sufficiently long period, and to help the NHS to cope. Delay and obfuscate.

The quid pro quo is that this new phase of breaking COVID’s circuits will need to be matched by more money. The alliance of necessity that has been forged between the Treasury and the Bank of England will need to keep pumping the presses to see the economy through each of these breathers.

Tim Martin is a chap I admire hugely. We disagree on many things. And I readily acknowledge there is a tiny difference between us in that only one of us has single-handedly built a fantastically successful pub company. Tim has an opinion on everything and is thankfully rarely shy of sharing his wisdom with the rest of the world. This time last week he produced a characteristic piece berating areas of the media for suggesting that pubs were largely to blame for this second wave of COVID infections. It was terrific stuff and in no way diminished by the more recent speculation linking the Bolton surge to one post-holiday pub crawl.

Never mind. Tucked away in Tim’s rant was the news that Wetherspoon’s sales on Saturday 12th September were 22.5% lower than the corresponding day in 2019. That, I think, is a pretty good guide to where the UK economy currently is. It is much, much better than in April, but the new normal for the average business is about 20% down on pre-COVID. As a necessary statement of the totally obvious, some are faring very significantly better and others are still mired, paddle-less, up the wrong creek. But, on average, we think 20% down is a reasonable working assumption.

Having taken a 20 minute circuit breaker to watch the news conference, I can readily understand why the equity markets have decided to take another move downwards. The message was stark. But it does not detract from the truth that the upcoming lockdown will not be as dramatically restrictive, and that it will be as short-dated as the government thinks it can get away with. What we will see is a shifting of expectations for the timing of recovery. The first half of 2021 has now become the second half. It may well have another further shift backwards and become 2022. All the time, dynamic and inventive businesses will find ways not only of surviving, but of thriving. At the other end of the spectrum, the weak will fall by the wayside. It is now over to the Chancellor and the Governor to show their next moves.

Finally, a plug for the next Hawksmoor virtual event. Next Wednesday, 30th September, we are hosting a session on ESG: what regulatory changes will mean, how to embrace these and the tremendous business opportunities. If you have not already signed up for this, then please do email Jill and we will send the links and details.

Well done to the few who were interested in last week’s list of cyber unpleasantness. Today, what was the name of the otherwise debonair dragon who required a gargle of a well-known mouthwash to treat his fiery halitosis?

Hiscox, past 2 years. Some relief on business continuity liabilities. 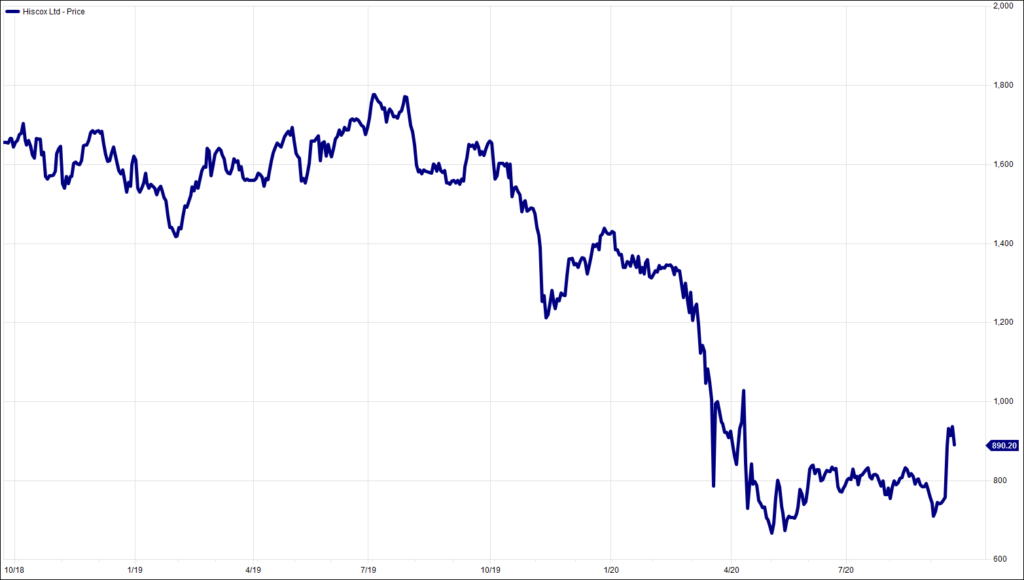 HA804/272
All charts and data sourced from FactSet