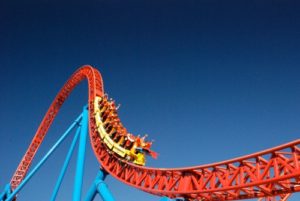 One should be careful with promises and predictions. This time last week I was confidently saying that we would quickly learn a little about how the world is currently turning. Well, it is still left to right but that is about as insightful as anyone is going to get at the moment. It is a hotchpotch, a potpourri, a patchwork miscellany, a gallimaufry, even a salmagundi of contradictory pluses and minuses. 2021, to restate the exceedingly obvious, is a year of ups and downs.

It is worthwhile running through some of these contradictions. The UK has stuck a lot of needles in a lot of arms. In fact more needles in more arms than almost anyone else. However, it can be argued that we are going at twice the speed as we have chosen to provide first jabs only for the time being, while every other country is providing boosters on schedule. So are we being progressive or taking an enormous risk? The markets say the former, and sterling is flavour of the quarter.

Barratt Developments tells us that UK housing is in such good fettle that they will restart dividend payments and may even be able to pay a special this year. The new build market, though, is propped up by the stamp duty holiday and Help to Buy. Will either or both be taken away by a Chancellor keen to be seen attempting to balance his books?

BP and Royal Dutch Shell both published their results for the last quarter of 2020 last week. Neither was pretty. Both have titanic amounts of debt. Both are trying to untangle their Gordian knots of how they cope with paying off the money they owe, paying dividends to shareholders and trying to find a future in a decarbonized world. Both are, surprise surprise, ever more dependent upon the price of oil. And here we come to one of those odd unintended consequences. The business of exploring for sticky black stuff has become so demonized that we might just run short of it over the next decade or so, while the world waits to build enough windmills and solar farms to make up the difference. The pressure from the lobbyists, and all parties pushing decarbonization, may just create the very conditions that will encourage the oil companies to stay hydrocarbon for longer.

The Bank of England has repeated its confidence that the UK will have a rapid economic recovery once we all have had our jabs. It is nice to hear. I cannot avoid a quick expletive about the government’s apparent refusal to countenance the provision of evidence of having received a vaccination, but doubtless someone will be able to explain to me why this would be ‘discriminatory’, in Nadhim Zahawi’s words. Never mind, and back to the Bank. In raising hopes of a jollier summer ahead, the Bank is also reminding markets that the quid pro quo is that it will need to take its foot off the throttle of quantitative easing.

Gilt yields have been edging higher in recent weeks. The Bank has now added a bit of impetus to this. This matters. As we have been stressing for some time, the size of the national debt does not matter so long as the cost of it stays at zero, or thereabouts. If, however, we get to the point where the government ever has to pay a meaningful amount of interest on its debts, then we enter an altogether different creek. Experience suggests that equity markets are very good at ignoring bond yields for long periods of time, only to dramatically spot later on that the Emperor has no clothes.

Whilst we all admire the regal regalia, the markets are starting to behave like a drunk in a nightclub. Yes, I know they are all closed at the moment, and yes, I did occasionally go once upon a time. I believe the expression used to be the beer goggles. Investors are loving both the recovery plays and the old favourites. So Restaurant Group, the struggling owner of so many car-park-sited family diners, rose by a third last week and is approaching its pre-lockdown share price. The mood of investors in the leisure industry in particular has been lifted by the previous week’s news that an American private equity firm has its eyes set on Marston’s. To give some balance to this, the stock price of Microsoft, probably the archetypal date for all seasons, is up an impressive 10% over the past month and closed on Friday less than a dollar below its all-time peak.

This week we have the spectacle of the impeachment trial to look forward to. Doubtless we can all indignantly think that he is as guilty as sin, without wondering too much about how the social media companies can ban the accused whilst permitting so much else on their platforms. It’s a mixed up, muddled up, shook up world. (Except for Lola).

Finally, well done to everyone who knew last week’s references to James Bolam and When the Boat Comes In. Today, in a classic episode of foul play: if the funeral was presided over by a rook, the grave dug by a pheasant and the coffin carried by a kite, who was the deceased and how did they die?

HA804/289
All charts and data sourced from FactSet