Semiconductors are crucial to the modern world. They can be found in almost every electronic device. For that reason, understanding what semiconductors do, what shapes the industry, and the market dynamics within is paramount. In this article, we will walk through the world of semiconductors and provide our view on the best way to gain exposure to this theme.

Our title may be lost on those that didn’t know semiconductors are commonly referred to as “chips”, despite minor distinctions between the two. In simple terms, they provide computing power to a rapidly increasing number of products. Most commonly, electronics or those that connect to the Internet of Things (IoT). The more complex explanation is that they belong somewhere between a conductor and an insulator, meaning the level of conductivity can be controlled. It is this ability that provides the power to make calculations.

Most semiconductors are silicon-based and are riddled with transistors, which act as switches. When a small current is passed through, a larger current can be turned on or off. These days, tens of millions of transistors can be formed onto a single chip. The smaller the gap between these transistors, the more powerful the chip. The latest semiconductor technology being worked on is just three nanometers, or three billionths of a meter, which is expected by the end of 2022.
The semiconductor industry lives and dies by a simple creed: smaller, more powerful, and cheaper. This is Moore’s Law, which states that the number of transistors on a chip doubles every two years. That means we can expect the speed and capability of our computing power to increase every couple of years. Growth is exponential.

Let’s start off with designs. At the bottom of the pyramid we have businesses that own chips designs, known as intellectual property (IP) cores. For a license fee, these can be used by other companies creating attractive recurring revenues. At this stage, an additional layer of design (on top of the IP cores) can be added using electronic design automation (EDA) tools. It is an incredibly specialized skill performed by a highly talented engineering team and takes time. There are two big players in this space – Synopsys and Cadence. Both can be viewed as the building blocks of the industry. The make-up of revenue is attractive too, contracts are non-cancellable and recurring, giving visibility and resilience through the cycle

Moving up the pyramid to chip companies brings two types, those with production capabilities and those without. Those without are known as ‘fabless’, i.e. they do not have their own fabrication plants to manufacture chips. Some will use their chips in their own devices, such as Apple and Amazon, others will sell their designs, such as Nvidia and Qualcomm. For the former, reliance on off-the-shelf chips is reduced. For the latter, profits can be reinvested into research and development rather than spending on an expensive manufacturing process.

Some businesses, known as integrated device manufacturers (IDMs), have exposure to the full lifecycle. Not only do they design the chips, but they also have manufacturing capabilities. Traditionally they tend to make just their own designs, which leaves the manufacturing of everyone else’s chips as the final piece of the pyramid – chip foundries.

Foundries manufacture chips in their fabrication plants (fabs). This is the process of turning the design into a physical chip which requires an incredibly complex and expensive process. Due to the difficulty of the work being carried out and the cost of doing it, there are few pure-play foundries in the world and barriers to entry are high. The biggest, Taiwan Semiconductor Manufacturing Company (TSMC), is the dominant player with over 50% market share. TSMC has also pledged to spend $100bn over the next three years to grow its capacity. It is hard to see a world where TSMC drops below top spot. Samsung is the second biggest with just 17% market share; moving further down the list companies have single digit share. This is the area we are most interested in from an investment perspective, as we will explore later in the article.

Semiconductors are at the cutting edge of technology. There is constant pressure for designers and manufacturers to innovate and create chips that are faster and more powerful than their predecessors. This, of course, comes at a cost. Research and development budgets are large and capital expenditure plans are growing. It is for this reason that the semiconductor process is being split into specialist parts – design and manufacturing. This is evidenced by the emergence of fabless chip makers and pure play foundries. From an investment angle, this creates more opportunity and accessibility to the most attractive parts of the market.

Historically, there has been a high degree of cyclicality to the industry. When times are good, profit margins are high and supply can’t keep up with demand. However, when times are bad and demand falls off, there can be much wider implications. Semiconductors play a crucial role in a wide range of supply chains. The C-19 pandemic has brought the global semiconductor shortage into the forefront, although the trend was already in place. Semiconductor supply had been struggling to keep up with demand well before the first covid case. We are amidst a technology boom which has seen demand grow exponentially. It is impossible for supply to do the same, due to the specialist nature, long lead times, and cost of building more infrastructure. With technology advancing at the pace that it is, and uses for semiconductors growing and diversifying, the traditional boom and bust model may be outdated. The emergence of artificial intelligence, Internet of Things (IoT), and machine learning is accelerating long-term demand, meaning we could see the industry operate with a steadier growth model moving forward.

That growth is not to be underestimated either. According to McKinsey & Co, the industry is set to grow at 6-8% per annum all the way until the end of the decade. Whether at the lower or upper end of the range, that would value semiconductors as a $1 trillion industry by 2030 (as shown in Diagram 2). Around 70% of that growth is expected to come from just three segments: automotive, computation and data storage, and wireless communications. Geographically, there are two major markets: United States and China, with the US the larger.  It has previously moved most of its fabs to Asia, though due to geopolitical risks, they are looking to bring more chip production back to the West. China is the world’s largest manufacturer of electronic goods (with a 36% market share) and in 2020 spent $378bn importing semis (data source: Semiconductor Industry Association). It is understandably seeking greater capacity. Both countries are trying to decouple their semiconductor ecosystems.

Margins across the industry are impressive. Synopsis and Cadence, two of the biggest players in the design space, earn an EBITDA margin of 35% and 42% respectively. That’s a similar level to ASML, which provides wafer fab equipment to foundries. But the most money is being made further up the pyramid. Taiwan Semiconductor Manufacturing Company (TSMC) boasts a margin of just under 70%. 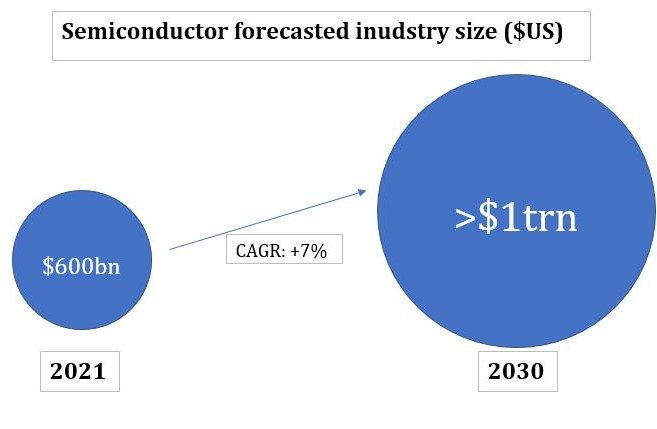 There are a number of ETFs available in the market, which take a broad-based approach to investing in the semiconductor theme. Whilst there is industry growth and attractive margins on offer, valuations are a challenge across these products. Designers Cadence and Synopsys trade on 35x and 33x next year’s earnings respectively. Both are considerably higher than their five year averages. ASML, which produces foundry equipment, and Nvidia, a well-known chip designer, trade on 28x and 33x. Our preferred method of gaining exposure to the semiconductor theme is through TSMC which trades on just 16x forward earnings.

It is not just valuation that draws us to TSMC. Chips are an essential part of modern technology and TSMC has a market leading position (and arguably a near monopoly) in production. Barriers to entry are high too. The group has pledged a large spending plan to stay at the cutting edge of the industry – only Samsung and TSMC can produce 5nm chips (the smallest version available today). With design being split from manufacturing, TSMC is set to benefit from companies moving to a fabless business model. Intel is moving towards a hybrid approach, and will rely on TSMC for extra production capabilities. Demand continues to grow for chips as technology advances, the challenge for designers is to create the latest state-of-the-art chips. TSMC therefore has limited exposure to the risks that surround designs, and will simply benefit from the growth in the industry. This ‘pickaxe’ type play on the industry appeals to us above and beyond other areas and a broad-based ETF.

Health Warning/ Disclaimer
This document should not be interpreted as investment advice for which you should consult your independent financial adviser. The information and opinions it contains have been compiled or arrived at from sources believed to be reliable at the time and are given in good faith, but no representation is made as to their accuracy, completeness or correctness. Any opinion expressed, whether in general or both on the performance of individual securities and in a wider economic context, represents the views of Hawksmoor at the time of preparation. They are subject to change. Past performance is not a guide to future performance. Hawksmoor Investment Management Limited (“Hawksmoor”) is authorised and regulated by the Financial Conduct Authority. Hawksmoor Investment Management Limited is registered in England No. 6307442 and its registered office is at 2nd Floor, Stratus House, Emperors Way, Exeter Business Park, Exeter EX1 3QS. FPC413