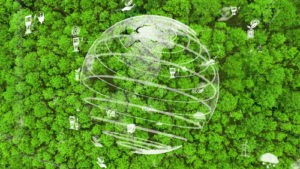 Climate change and environmental factors have undoubtedly climbed political agendas. Governments are rolling out net zero and clean energy policies at a faster rate than ever before. Carbon is, of course, a big part of the picture. Net zero involves reducing one’s carbon emissions by as much as physically possible, then offsetting the remainder. That makes the emerging carbon allowance and offset market very interesting. In this article we’ll explore the importance and benefits of these markets, and assess the investment potential.

When an investor reflects on the 1990s, their mind might well first go to the dot-com bubble. However, this decade was also significant for carbon markets. The Kyoto Protocol in 1997 saw leaders agree terms on emission trading to allow countries that have spare emission units to sell them to countries operating above their set targets. This introduced a new commodity – emission allowances.

Due to a long and complex ratification process, the Kyoto Protocol didn’t come into effect until 2005. At this point the European Union Emissions Trading System (EU ETS) was launched. It is the most established carbon market today. According to Refinitiv, it accounted for 88% of carbon emissions traded globally in 2020, with a market value of over €200bn. The bulk of the remaining is traded in North America, which hosts two major markets – Northeast’s Regional Greenhouse Gas Initiative (RGGI) launched in 2009 and California Cap and Trade Program launched in 2013.

EUAs: an IOU for CO2

As previously mentioned, the EU ETS is the largest carbon trading market to date having been the first greenhouse gas emissions trading scheme in the world. It is a cornerstone of the EU’s policy to achieve carbon neutrality by 2050. The scheme targets the largest polluters across the 27 EU member countries as well as Iceland, the United Kingdom, Norway, and Liechtenstein. As of 2020, it covers around 10,000 factories, power stations, and other installations; with mandatory inclusion for the most energy-intensive sectors. This accounts to 40% of the EU’s greenhouse gas emissions.

The EU ETS operates using a cap and trade system. The European Commission sets a cap on the total amount of certain greenhouse gases, including carbon dioxide, that can be produced by installations within the system. The scheme has been divided into phases, the latest of which began at the start of 2021 and will run until the end of 2030. Each phase sees a reduction in the cap.

This is where the trade element comes in. The arrangement sees companies buy, or in some circumstances receive, allowances (EUAs). Those that perform well in respect to reducing their emissions and have surplus allowances can sell them. Those that find themselves over the cap will need to purchase extra EUAs, or else face hefty fines. Thus a carbon trading market is born and companies are financially incentivised to cut emissions.

Carbon trading is a cost effective way of reducing emissions without much government intervention. Other than the cap set, the system runs itself and emissions flow naturally to where they need to be.

Our economics textbooks teach us that as supply is taken away, prices rise. Under the European Green Deal, the EU has committed to a net reduction in greenhouse gas emissions of -55% (below 1990 levels) by 2030. The rate at which EUAs shrink annually has also been increased. That makes this latest phase the most stringent in terms of EUA availability. The price of EUAs has risen rapidly (see chart 1 below) placing further financial pressure on those failing to meet the cap. 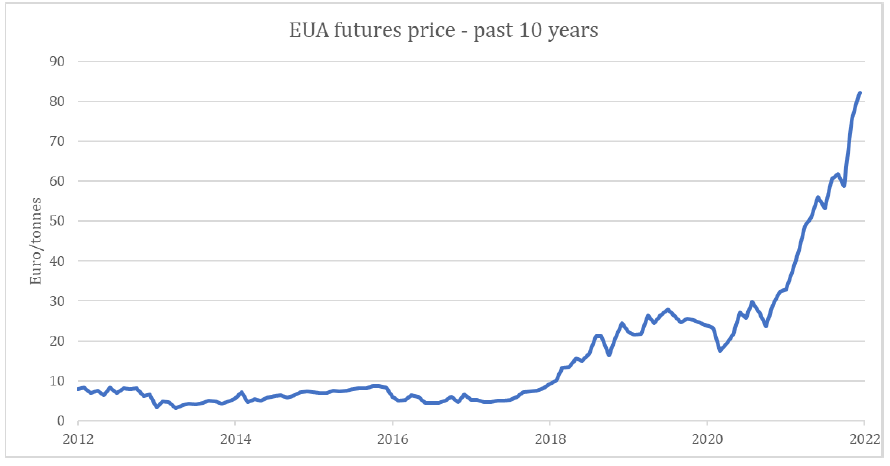 The major unintended effect of schemes like the EU ETS is carbon leakage. This arises if the cost of complying with carbon policies leads to a business moving production to a country with less stringent emission constraints. Carbon leakage often occurs in the most energy-intensive sectors, which are the very same ones the scheme is most concerned about.

This problem is not unique to carbon trading. Carbon taxes face the same challenges. To counter this, industries or companies deemed to be most at risk of carbon leakage receive a higher share of free allowances under the EU ETS.

Carbon as an investable asset class

Emissions trading is an effective and economical instrument in combating climate change, though how do carbon allowances fare as an investment? According to the CFA Institute, carbon now trades approximately $1bn (US) of volume per day, making it very liquid. To achieve the level of emission reduction needed with respect to the Paris Agreement, carbon prices will need to rise.

Modern carbon markets have evolved from earlier iterations. During the 2008-09 recession, carbon prices dropped as the economic downturn was accompanied by a fall in demand. To combat a future demand side shock, ETS markets have introduced features to ensure a firmer market. These include supply adjustment mechanisms and increased use of auctioning. Markets are much more resilient now than before, though that doesn’t make them immune to a prolonged economic downturn.

Overarching all of this is the world’s climate change issue. If economies continue to act in their current manner there are potentially disastrous implications. Responsibility falls to governments to ensure that carbon emissions are reduced at the necessary pace. Carbon is a key piece of the puzzle and a higher price is desirable.

European Union carbon credits were one of the best performing commodities last year with prices more than doubling to nearly €80 per tonne. Focusing on Europe, the primary way of investing in carbon allowances is via an ETF. IPath Series B Carbon ETN and KraneShares European Carbon Allowance Strategy ETF both focus on EUAs, with the former delivering +161% in performance in 2021. The latter was launched in October, but still delivered an impressive +31% since launch. Both strategies focus on the futures market.

First, this ETF holds physical EUAs meaning they are unable to be used by industrial firms to pollute. Secondly, under EU law, holding an EUA for twelve months or more will trigger additional permits to be cancelled in future years, therefore making the reduction pace faster. Finally, by investing in physical carbon you avoid the performance drag from futures markets in contango – a situation where the futures price of a commodity is higher than the spot, which causes extra costs when rolling forward contracts.

Carbon will be an important part of the next decade. Governments’ net zero targets are legally binding and progress must be made immediately in order to achieve them. The dynamics of emissions trading means that carbon prices are intended to rise, and thanks to lessons learned in previous economic downturns, modern markets are more solid than ever before. Carbon has placed its name on the list of investable asset classes and for those that want to make a real impact, SparkChange Physical Carbon EUA ETC looks to be an attractive option.

Health Warning/ Disclaimer
This document should not be interpreted as investment advice for which you should consult your independent financial adviser. The information and opinions it contains have been compiled or arrived at from sources believed to be reliable at the time and are given in good faith, but no representation is made as to their accuracy, completeness or correctness. Any opinion expressed, whether in general or both on the performance of individual securities and in a wider economic context, represents the views of Hawksmoor at the time of preparation. They are subject to change. Past performance is not a guide to future performance. Hawksmoor Investment Management Limited (“Hawksmoor”) is authorised and regulated by the Financial Conduct Authority. Hawksmoor Investment Management Limited is registered in England No. 6307442 and its registered office is at 2nd Floor, Stratus House, Emperors Way, Exeter Business Park, Exeter EX1 3QS. FPC121