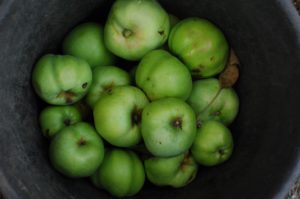 It is as if markets take holidays and roadshows as an affront. There is a certain inevitability about the correlation between time away from the office and the magnitude of market moves. This is especially so if one embarks on a fortnight’s worth of seminars arguing a particular viewpoint. The nice chart of the S&P 500 Index that I have been using used to finish perfectly in the top right hand corner. No more: it dropped quicker than the Bramleys off my tree in Storm Callum.

There is an adage along the lines of ‘stuff happens’. Try as we might, we cannot find any greater reason for the wobble in equity markets than ‘stuff’. There has been no new news. The source of the wibblywobblies was America apparently, where no-one is quite sure whether they should be more worried about the economy heating up or cooling down.

The important issue is not that share prices have been falling, it is much more that it has caused such a brouhaha. This is something that we are all going to have to get used to. It is an inevitability of a bull market of almost ten years’ standing that many participants expect share prices only to rise. That is natural: it is all they have ever seen.

I have argued before in this column that those employed in finance and aged under thirty have, as a generalization, only ever worked in a bull market. Those who have invested within the past ten years have only experienced rising equity markets. No matter how much anyone argues and explains that markets are skittish and will fall, the bull market creates an environment of expectation. That expectation is likely to be troublesome.

We should expect a prevalence of short-termism. Regulation dictates that clients must receive portfolio valuations quarterly. But even this is insufficient: we all know that clients must be told when the mark to market value of the portfolio has dropped by 10% since the start of each and every quarter. Whatever the rights and wrongs of this, it will mean that more clients will be more worried by ‘stuff’. We all need to be prepared.

Regular readers will know that we spend a lot of time and effort contemplating Middle East geopolitics. The murder of Jamal Khashoggi has the potential to become an event that changes the shape of the world. It also has the potential to be forgotten quite quickly, but let us focus on the first potentiality. President Trump has needed cordial relations with Saudi to further his policy of seeking regime change in Iran. Actually, it is debatable if the policy is really Trump’s or Saudi’s, but that is by the bye. Should it have become politically unacceptable for Trump to ally with Saudi, his Middle Eastern policy is out of the window. If so, then what is the American relationship with, in particular, Turkey and Israel going to be?

These are massively important questions and without answers. As is the issue of the opportunity that this would provide to Russia. Trump will hope to be able to muddle through and let time dampen the extraordinary anti-Saudi swell. We are less sure. We are in an era of extraordinary change (of which Brexit is a significant manifestation). A change in the relationship between Washington and Riyadh, or even a change of regime within Saudi, is perfectly possible and globally significant. Again, we have written before about the possible fall of the House of Saud. The scenario has become considerably more credible over the past fortnight.

The United States is now pretty well energy independent; it does not need Saudi oil to turn the lights on. Its defence industry will also move on. For those countries without their own sources of hydrocarbon power, this will all highlight the risk of reliance on Middle Eastern oil and gas. The stampede to non-hydrocarbon and renewable energy is highly likely to get another major boost.

Parochially, we cannot escape Brexit yet again being the major event of the week. We are at the business end of the process. Mrs May will need to agree a proposal with the EU and have this passed by parliament. Given the near impossibility of any deal receiving majority backing, what happens thereafter is still mere speculation; no-one knows whether both sides just keep trying, whether they give up and career into ‘no deal’, whether Boris will take the reins or even if the UK has to have yet another election and probably a Labour government. It is possibly the least surprising thing in the whole shambles that ‘investment’ is taking a hammering.

Many congratulations to the smattering of wordsmiths who spotted our anagram last time. Today, as Humphrey was to Downing Street, who was John Lennon’s partner in crime?