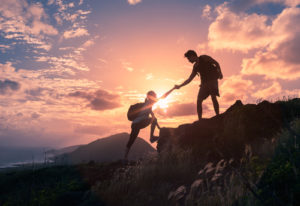 It is very rare that Innovation wishes you all a very happy Tuesday. But until further notice, we will be writing Innovation weekly and I will not be using Bank Holidays as a weak excuse for failing to communicate with everyone.

The rises in equity markets have been pinned on the lapels of hope. The hope that the infections are peaking, the hope that lockdown restrictions will be eased and the hope that economic carnage will soon give way to a steady return to pre-virus days and ways.

It would be lovely to think that these hopes were built on rock. Unfortunately it is more likely that it is merely the natural reversion to optimism that comes from such a precipitous fall. Lockdown is a strategy of delay, not of genuine amelioration. Coldly, it spreads deaths over a more manageable timescale. The only exit strategy that is currently visible is a vaccine, for seven billion people.

Lockdowns will be eased. This will be at different speeds in different countries, but in all it will be with the most extreme caution. And as infection rates inevitably rise thereafter, they will be re-imposed. Again, at differing speeds.

One effect of this is that the strong majority of what economists, strategists, analysts and probably company executives believe is much too optimistic. When chewing on life’s gristle, it is natural to give a whistle and believe that this will help things turn out for the best (with apologies and eternal thanks to Eric Idle). But until such time as we have a vaccine, with doses available by the billion, the economic ice-age is here to stay.

We will learn more about how cold economies are with more of this week’s economic data, especially from the United States. In the pre-virus world, we would not normally think too much about the monthly housing starts, nor the weekly unemployment claims. These would usually be the territory of the ‘traders’ and dismissed as short-term noise by the much more refined (allegedly) long-term investors.

In April 2020, however, they matter very much indeed. At the moment, we are all guessing at the height of the cliffs over which lockdown has forced economies. The short-term economic data will give us more informative yardsticks (a measure that appears to have defied decimalization).

The pace, depth and duration of the ‘resizing’ of economies is only part of the overall investment equation. There is an equally big unknown in what the post-virus world will look like. Will we return to the type of world that we have known for the past twenty, thirty, forty years? It is possible. But it is equally possible that it will be dramatically different.

To illustrate this, let me set a hypothetical scenario and then ask a completely open question about this. COVID maybe kills one in a hundred people. In the absence of a vaccine, or cure, it will therefore, arguably, kill seventy eight million out of an estimated global population of 7.8 billion. Now suppose that a vaccine, or cure, is found. This will save seventy eight million lives, plus many, many more from the knock-on effects. It will save the world.

Remember this is only a hypothetical scenario. But now, how much profit should this hypothetical company be allowed to make from saving the world? And is it right that a small number of shareholders will become immensely rich as a result?

It is a question that should quite rightly invoke a range of very forceful responses. It is also a question that will help shape post-virus capitalism. It is one that we will come back to many times in the coming weeks.

A big well done to all those who knew last week’s indulgent reference to the Wichita Lineman. Today, a bit tougher: lyrically what precedes Albuquerque and Oklahoma?

Royal Dutch Shell (B shares), past 3 years. A little relief. 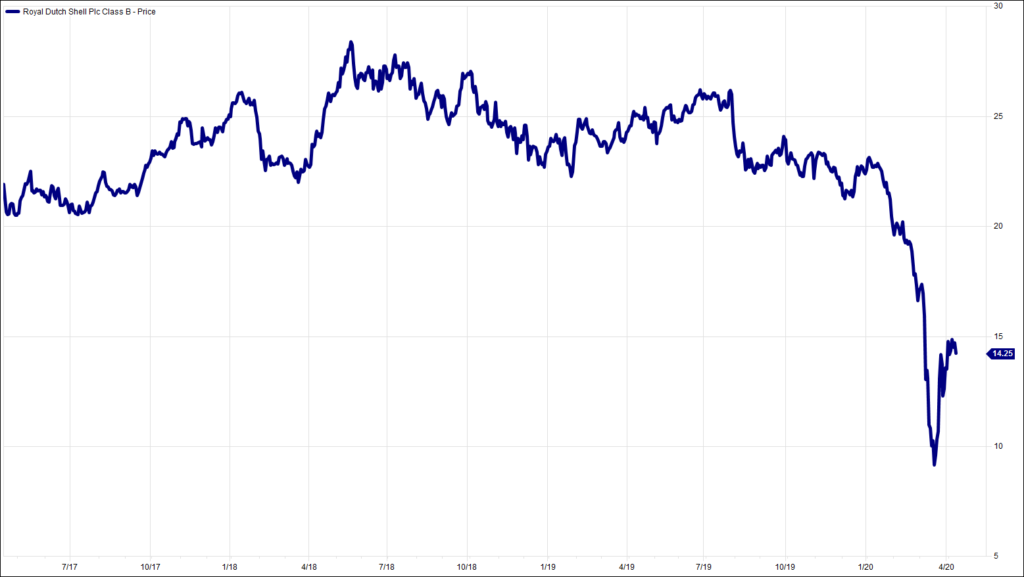 HA804/250
All charts and data sourced from FactSet