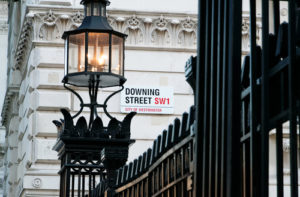 I try to write as little as possible about our esteemed prime minister. No matter what I say, no one will change their mind about him. Nonetheless, international perceptions of the UK’s politics and monetary policies matter in the investment world, largely via sterling. It has long been Hawksmoor’s view, and it remains so, that sterling is a structurally weak currency. That is important, as it means that investments overseas will have a long-term following wind from a falling pound. It is a bonus for us that both the government and Bank of England have tied themselves up in knots of Gordian proportions over the past few months.

The Conservative MPs vote this evening probably only matters in the short-term. A vote of confidence is never a good thing, but Boris’ quest for power and legacy means that he is the least likely person to walk away until he is absolutely forced to. Until something changes, the UK is greatly challenged. We have a ‘tax and spend’ government, prepared to change policy on a whim wherever there is a sniff of popularity. We have a Central Bank that, to the eyes of certain observers, appears to be clueless about the causes of the UK’s inflation, or how to rein it back without causing recession. And this is without starting to take into account our unique position in having cut ourselves off from the European labour force that has contributed to the economy for so long. One can understand the spleen vented by the estimable Lord Rose, currently chairman of Asda, about the proposed reinstatement of imperial measurements into UK retailing. The idea appears to have been dreamt up by someone who believes that the Hovis advert was real life, that the residents of Lambeth all wear pearly clothes while dancing in the street and that the Queen really did have tea with Paddington Bear.

Apologies. It just beggars belief that with everything currently facing the UK economy, someone somewhere in touching distance of power, thinks that it is a good idea to make our retailers price things according to pounds and ounces. The words ‘plot’, ‘the’ and ‘lost’ spring to mind.

Gilt yields have been rising sharply. The yield on the benchmark 10 year gilt this morning has been as high as 2.2%. This may pale next to the rate of inflation, but it is the highest absolute return achievable since 2015. The high street and online banks are also starting to be a little more generous; a glance at comparison websites shows that the best available rate on an instant access account is now 1.5% (ignoring those with maximum amounts of around 20 shillings), and that is without succumbing to temptations of a BCCI-wannabe. A one year term deposit is now offered at 2.4%.

It would be wrong to suggest that this is a phenomenon of the UK. In Europe, the yield on 10 year German bunds has risen from negative territory to well over 1%. In the United States, the number is 3%.  Do you remember Grexit? In 2012 the world’s view of Greece was such that the yield on its 10 year bond was a less than flattering 27%. Last year it was 0.6%. This morning it is 3.8%.

The markets are of the view that the euro may be due a spot of form. The dollar has already soared, while there are queues of scribes proclaiming the ills of sterling. If no more than the need to try to do something different, the euro is becoming the currency of the moment. That again helps our portfolios, but we are not convinced it will last. The European Central Bank, like the Bank of England, is going round in circles of angst and is torn between the need to raise interest rates and the inevitability of slower growth. Its Governing Council, the bit of the Bank that sets interest rates, meets this week. While it is expected to do nothing this month, there is a firm expectation that it will raise rates in July.

The week’s main economic event, though, comes on Friday, with the latest monthly update to American inflation. As is true every month, the consensus of the experts is that the rate will fall, this time from 8.3% to 8.2%. In this summer of randomness and over-reactions to data, a fall of any magnitude would be very well received. It would, some will say, show that inflation has peaked and markets can begin to be happy again. It is a risky line of thinking, as we have been arguing for quite a while. There are precious few signs that prices are stopping rising; in fact, quite the opposite. A peak inflation rally runs the very tangible risk of crashing into even higher inflation in the autumn. The rollercoaster is still rolling.

Finally, well done to all the fans of the Doobie Brothers amongst our readers, who made last week’s question look easy. Today, as we move away from marmalade, who “just smiled and gave me a vegemite sandwich” all the way back in 1980?

FPC321
All charts and data sourced from FactSet