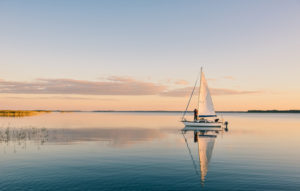 The challenge Innovation takes on each Monday morning is to find something relevant to your week and try to make this interesting. What can make this tricky is that the two are frequently mutually exclusive. And so this week, I make no pretenses: what follows is an unashamed celebration of dullness, in all its splendour.

It has been a core theme of ours, for several years now, that the global economy is dull. The majority of the decade that has followed the Great Financial Crisis has been characterized by low and steady growth, and low and steady inflation. Yes, of course there have been short wobbly periods – up and down – but the overall picture is one of reassuring, heart-warming drabness. And dull is good. Low and steady growth and inflation make a very benign environment for equity and bond investors. So let us make this Monday a celebration of the mundane, the ordinary, the grey.

This is, though, the age of information technology. Your iPhone, your Galaxy, your Huawei give you access to information 31,536,000 seconds a year. Next year you even have the benefit of an additional 86,400 opportunities to look at the up-to-the-second unmissable news on Twitter, or FB, or Instagram, or Bloomberg, or the BBC, or Line, or Fox News, or wherever.

Whether voluntarily or by coercion, the world is addicted to information. The providers of this stuff need your attention. Why? Because in this bizarre game of voyeurism, the more times you click, flick and scroll through their content, the more they can persuade advertisers that they should pay to have the opportunity to flog you things you don’t need.

You all know that bad news sells. Psychologists prove it. This is probably by applying electric shocks to students, which appears to be the basis of most of these tests. But apparently we respond, on average, 2.4 times more strongly to bad news, relative to a symmetric piece of good news. Maybe it is measured by the reaction to not getting another electric shock relative to getting a bigger one.

This is, of course, why online valuations are so dangerous. Portfolios randomly move up and down (statement of the totally obvious). But we respond 2.4 times more violently to a 10% fall than to a 10% rise. And instead of using the random fall to buy some more, nature makes us curse our investment manager and we tell them to sell before we lose any more.

I digress. The point is less that of bad versus good news: it is of bad and good news, versus no news. Which of us is going to read the proverbial story of ‘minor incident, no one hurt’? Who wants to fill their weekends, their Mondays, their any days, with stories about the world being dull, boring and predictable?

Well, if you are still with me, then I am afraid that you are one of them. Over the past fortnight, we have learned that the US economy is pretty much ok. The UK could be worse, as could Europe. China? Not that bad. Last week, the Monetary Policy Committee’s newly and inspiringly named ‘Monetary Policy Report’ (did they get a consultant to do the re-branding?) told us that they stood ready to move bank rate up or down depending on what happens next. In the meantime, nothing will happen.

The world of finance and investment has far too many people paid far too much to make up stories, spins, takes, points of view to make us think a) something is happening and b) they are very clever and deserving of some form of payment.

And so we are overloaded with sensationalist commentaries and narratives. Now that the recession thing appears to be dying an overdue death, what will the next house of horrors be? The trade talks have taken a turn for the better, but there is bound to be more mileage in these before they are put to bed. The UK election is drifting towards a BJ majority, which is the best case outcome for the markets.

Possibly because it is in the headlines today, and is being so skillfully juxtaposed with the Berlin Wall, Hong Kong is a strong runner. We are probably getting closer to tanks on the streets. But will it actually matter to the world outside? Will the UK cancel the sale of British Steel to Jingye Group if Xi sends the troops into Kowloon?

Congratulations to those who knew about speaking English, inviting teams from other countries to World Series and the right way to greet the head of state. Today: a French polisher, alleged burglars, kids under the mistletoe, fishing – what’s the link?

Intu Properties, past 3 years. No respite. 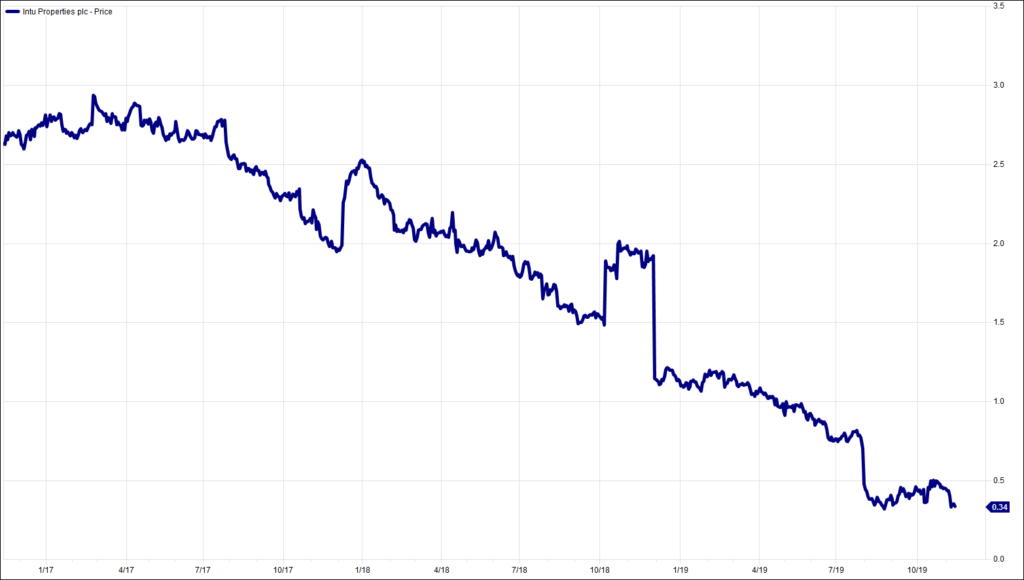 HA804/235
All charts and data sourced from FactSet