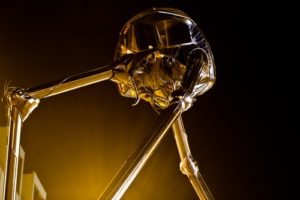 War of the Worlds

It is over 120 years since War of the Worlds was first published. If you are not familiar with HG Wells’ classic science fiction, it ends with the seemingly invincible Martians rendered helpless by their susceptibility to the common cold. The analogies with 2020 are remarkable.

Your author has been working in investment management for almost 34 years and I thought that I had broadly seen it all. It may as well have been 134 years: a time like this has never been experienced. Yet that does not mean that all hope is lost. Far from it, in fact.

Although these are very different circumstances to the Great Financial Crisis, crucial lessons have been learned. The speed and magnitude of the finance made available by Central Banks around the world has been stunning. This is terribly important. Business survives on access to credit and the Central Banks have let it be known that the commercial banks will have access to limitless amounts. Not only this, but the UK government is preparing to bypass the banking system completely and make cash available to distressed businesses.

Such measures cannot actually turn the tide, but they can very considerably mitigate its impact. Without these, the economic impact of the Coronavirus would be potentially catastrophic. With them, and with a following wind, the situation is manageable. Bizarrely, without the Great Financial Crisis, the current situation would be very much worse.

We need to mention the behaviour of financial markets. So far, these have been extraordinarily rational. Homo sapiens is a species programmed for survival. We run from hungry lions rather than standing, fighting and being eaten. When confronted with danger, we run away. It is in the best interests of survival. Stock market investors are no different to anyone else. They run for safety. The biggest threat of all though, is the one that is unknown. Coronavirus is a danger with an unquantifiable magnitude. Running for the hills is the logical response.

Stock market valuations had been presaged on a long and benign economic cycle. That prop has been firmly jettisoned. What we have is an unprecedented lowering of demand as a result of isolation, or consumer shutdown. We have seen already from the huge number of corporate trading updates that the impact of this is very severe. Markets now know this. The issue is how long it will last.

The Chinese and Korean data appear to show that, in the short-term, isolation works. We have yet to see what happens when restrictions are lifted, but the rapid diminution in new infections in these countries is both underreported and grounds for optimism. Here in the West, we know things are going to get worse before they get better. Testing equipment is an important part of the road to recovery, the hope being that many more than thought have already had the virus asymptomatically and can then continue as normal. Eventually a vaccine is possible and the population gradually will naturally build immunity. All that is certain; the unknown is the timescale.

It is a statement of the obvious to you that 2020 is an unprecedented year. We have already taken action to try to defend the value of your portfolio as far as we can, but we cannot shy away from the reality that values will have fallen considerably. Many companies are also not going to pay dividends at least until later in the year as they preserve cash to keep the business alive. Our portfolios though typically hold a good proportion of bonds, where the income is safer. We also frequently invest into gold, which will continue to be one of the safest assets globally.

If I may summarise, we should all expect that the impact of Coronavirus on both the economy and on stock markets will become even worse before it improves. Both though will improve: the issue is ‘when’, not ‘if’. The actions of governments and Central Banks will make the downturn very considerably more bearable than would have been the case a decade ago.

Homo sapiens is also relentlessly entrepreneurial and will quickly adapt to the world of corona and other viruses. Great businesses are run by great people with great ideas. That will never change. As and when the news flow surrounding the virus takes a turn for the better, asset prices will soar. We are seeing valuations of fantastic businesses that suggest their very survival is in doubt. Knowing that there will be a time when the virus news flow will be getting better and not worse, our investment strategy is to ride out the coming weeks and months. None of us should doubt that there will be times that this appears to have been the wrong thing to do. But by concentrating on the highest quality and safest investments, coupled with half an eye on some of the opportunities emerging, we are as prepared as we can be.