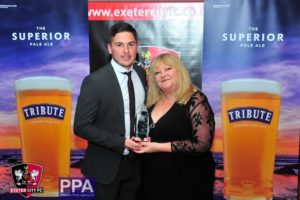 Hawksmoor has been sponsoring the popular Player of the Month award this season – with the winner being decided by votes from Grecians’ supporters. Christy has won this award several times, but due to a string of match saving performances (including 13 clean sheets) he was also voted the fans’ overall Player of the Season.