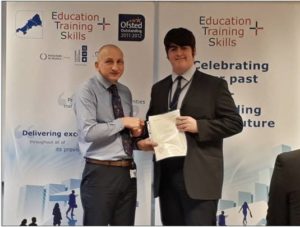 Lewis started his Apprenticeship with Hawksmoor Investment Management in October 2016, when he was taken on by the Exeter Office as a Trainee Investment Administrator. Just over a year later he completed his Apprenticeship, and earlier this week was awarded his certificate during a presentation ceremony at the Education Training and Skills headquarters in Exeter.

In addition to the successful completion of his Apprenticeship, Lewis was offered a permanent position at Hawksmoor as a Junior Investment Administrator.

Lewis said “Once I had completed my qualification, I was delighted to be offered a permanent position with Hawksmoor Investment Management. Big thank you to my colleagues for their help and support throughout the qualification.”